Experiment Tests Whether Universe Is Actually A Hologram 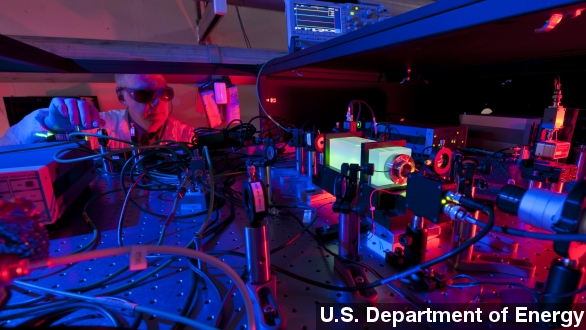 SMS
Experiment Tests Whether Universe Is Actually A Hologram

By Jay Strubberg
August 27, 2014
Researchers at Fermilab are using a device called "The Holometer" to test whether our universe is actually a 2-D hologram that just seems 3-D.
SHOW TRANSCRIPT

Ok — ready to have your mind blown?

A new experiment is testing whether our apparently three-dimensional universe is actually a 2-D hologram, some kind of Matrix-like projection we all perceive as real.

Researchers at U.S. Department of Energy's Fermilab are carrying out the experiment using a new device called The Holographic Interferometer, or "The Holometer" for short.

The machine uses lasers to try to measure a thing called quantum jitter — telltale movements spacetime might be making on a very, very, VERY small scale. (Video via YouTube / 'The Holometer')

The researchers use the analogy of how a TV screen looks more pixilated as you move closer to it.

The picture looks pretty sharp from a distance, but the more we zoom the blurrier it gets until we start seeing tiny pixilated blocks. Now, multiply that by ten trillion trillion times the size of an atom and that's what they're tracking. You know, no big deal.

The Verge says if the Holometer finds this "holographic noise," it would support one view in physics "that space is continually vibrating, sort of like a wave — a 2D wave, to be exact." And "that information about our universe is stored on tiny two dimensional particles​."

SCIENTIFIC AMERICAN: "In this view, our world is a three-dimensional projection of information that's written on a two-dimensional surface, an illusion much like a hologram."

Don't ask us to explain the specifics, but from a mathematical point of view a 3-D universe and a 2-D hologram are pretty much the same thing. And if the universe really is some kind of hologram, it would clear up a lot of confusion about some of the mysteries of physics. (Video via NASA)

One of Fermilab's directors said, “We want to find out whether space-time is a quantum system just like matter is. If we see something, it will completely change ideas about space we’ve used for thousands of years.”

The Holometer experiment is expected to gather data over the next year.

This video contains images from the U.S. Department of Energy.