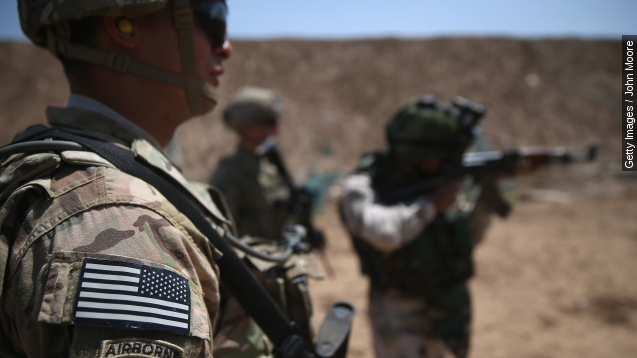 While reports on the number have varied between 400 and 500, the consensus is The White House is looking to increase its troop deployment to Iraq. (Video via U.S. Department of Defense)

But it's not the coup some lawmakers were looking for — the additional troops will be used to further boost training of the Iraqi military.

"We need more troops on the ground, we need forward air controllers, we're just referring to airstrikes: did you know that 75 percent of those combat missions return to base without having fired a weapon?" Senator John McCain told CBS's "Face the Nation."

For its part, the Pentagon says that's a normal ratio, and officials have played down the need for troops outside of a training capacity. (Video via C-SPAN)

But The New York Times reports there's also a much less public debate going on in Washington between the Central Command and the State Department over the administration's Iraq strategy. (Video via PBS, ABC)

"The Central Command has long emphasized the need to strike a blow against the Islamic State by recapturing Mosul," but, "State Department officials have long highlighted the strategic importance of Anbar Province in western Iraq."

The U.S.'s strategy in Iraq has been under fire in recent weeks in the wake of the Islamic State's capture of Ramadi — the provincial capital of Anbar province — and the president's comments earlier this week didn't seem to help his case. (Video via France 24)

"We don't yet have a complete strategy because it requires commitments on the part of the Iraqis as well ... the details of that are not yet worked out," President Obama told a press conference in Germany.

And it seems there isn't much time left to work them out, either: the additional deployment could start as early as this summer.