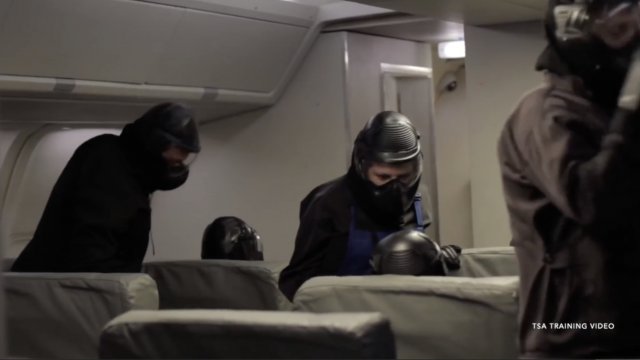 The credit cards used by federal air marshals are quickly approaching their credit limits, raising serious concerns about how the agency can continue operating.The government-issued credit cards have a limit of $7,500 per air marshal, according to the Federal Law Enforcement Officers Association. These cards are what air marshals use to pay for everything but the flight: hotel, taxi, food and other travel expenses. During the shutdown, the air marshals are not being paid any salary, nor are they being issued reimbursements to pay off the cards' balance.The problem, first reported here, is the subject of ongoing internal deliberation at the Federal Air Marshal Service, as well as the TSA and Department of Homeland Security. "Nobody thought this was going to go 35 days," said Brian Borek, who represents air marshals to the Federal Law Enforcement Officers Association. "And it has never happened before." 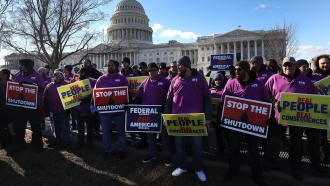 According to Borek, the credit card issuer — JPMorgan Chase — does not charge interest on the cards at least for a set time, per its contract with the federal government. However, the credit limit is set by government contract. Raising it would require additional negotiations, Borek said.The descriptions of credit card policies and limits were confirmed by a high-ranking official at the Federal Law Enforcement Officers Association.In an online FAQ for federal workers with government-issued credit cards, the Government Service Administration (GSA) admits "this issue can become quite complicated given the wide variety of agency missions, funding types, etc." Citibank and U.S. Bank also issue GSA credit cards. Newsy has learned about concern within the agency posed by the uncertainty of a possible remedy. Some air marshals are worried the TSA, which oversees the Federal Air Marshal Service, could curtail overnight travel. That could limit the types of missions that air marshals can be assigned. The government could put a moratorium on travel, effectively grounding the Federal Air Marshal Service. Borek would not comment about these scenarios, which if made public could endanger national security. 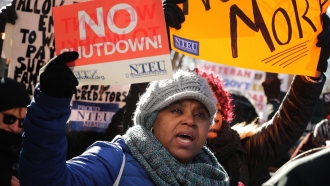 The credit card issue is just one stressor for air marshals during the shutdown. Like other "excepted service" government workers barred from collective bargaining agreements or forming a union, the air marshals have little protections when ordered to report to work without pay. They do not have a "hardship" provision, as do workers in other government agencies, that allows an employee to call out of work without punishment. And air marshals have added expenses, given the fact their assignments often take them away from home overnight.

They're also prohibited from using their GSA credit cards to pay for gas to get to the airport. In a statement, the TSA confirmed "it is against established law for employees to use government issue travel cards for personal use such as purchasing fuel."

The TSA also said: "Understandably, there is uncertainty surrounding the partial government shutdown but our people continue to perform at a high level. TSA's Federal Air Marshal Service continues to support these employees to ensure that they are not encumbered by unnecessary financial strains or hardships while they are not receiving paychecks."

"I'd say a majority of the workforce is being adversely impacted," Borek said. "They're worried. How am I going to get to work if I can't afford to put gas in my tank?"

The concerns come amid a spate of other troubling revelations about air travel. At many major airports, the TSA has struggled to keep all security checkpoints open as employee callouts more than double. Air traffic controllers have also expressed worries about overworked, understaffed control towers.

"We have a growing concern for the safety and security of our members, our airlines and the traveling public due to the government shutdown," the presidents of the National Air Traffic Controllers Association (NATCA), Air Line Pilots Association (ALPA) and Association of Flight Attendants (AFA) wrote in a statement. "In our risk averse industry, we cannot even calculate the level of risk currently at play, nor predict the point at which the entire system will break. It is unprecedented."

Borek said the issues facing the Federal Air Marshal Service are being overlooked. "We are professionals. We've been doing this for a long time. A lot of us are military," Borek said. "We're finding we need to lean on community a bit more. But that only goes so far."