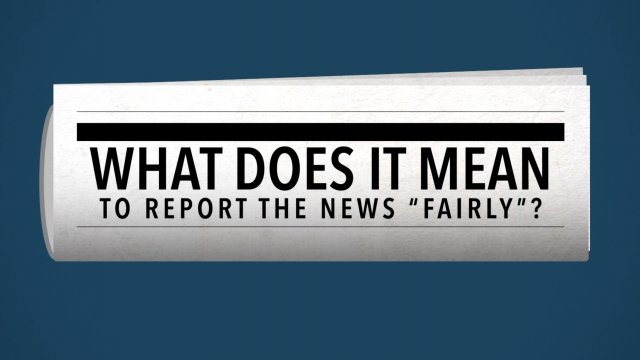 A Newsy Ipsos poll shows how fairness is perceived by cable TV viewers.

What does it mean to report the news "fairly"?

Consider this: Only 42% of Americans believe newspapers cover politics fairly. And it just goes down from there. The number is 41% for broadcast news, and considerably lower for online news: 32%. Cable? Way in the back, with 31%.

That's from a new poll Newsy conducted with Ipsos. That cable news scores lowest isn't surprising when you put it in context.

A recent study from RAND Corporation used machine learning and text analysis of the last 20 years of news coverage, and found news overall — regardless of platform — relies more heavily on argumentation and advocacy, and includes more emotional appeals. But the biggest change toward the subjective and abstract over the last two decades, according to RAND, has been on prime time cable TV.

Perceptions of fairness swing wildly depending on the platform, each person's political leanings, even how much they prefer certain outlets.

For instance, 64% of Democrats think their favorite outlet is politically fair. Just about half of Republicans think the same.

The least trusting are independents. Only 35% of independents think their favorite news source plays it straight.

Or take age as a factor: Ask millennials and Gen Z-ers whether their favorite outlet covers political issues fairly, and 48% will say yes. Pose the same question to someone over 65, and 69% say their preferred outlet is politically fair. That could suggest more is at play here than simple fairness.

There is real bias out there. But there are also perceptual elements fueling news fatigue and a generalized sense of distrust.

Honestly, on some nights, I'm part of the two-thirds of people who just tune out, turn off the noise.

But perhaps there's a better approach.

That idea of fairness? Let's flesh it out.

Take a fact-based story about immigration. If a reporter describes a raid on undocumented workers, some viewers will object to a description skirting their illegal presence. Others would chafe at calling any person "illegal."

For journalists, the reality is that word choices, like "illegal" vs. "undocumented," carry significance and can influence how hard facts are perceived. Whatever the choice, it's important for journalists to hold all truths' intention within their reporting just as it's important for consumers to hear a variety of reasonable perspectives. In the end, each viewer saw the same story. But did they really?

Scientists have established that we're not passive news receivers being injected with information. No, our experiences and points of view actively filter what we're consuming. Some valuable information becomes intellectual coffee grounds, holding robust material that never makes it into the finished product.

One term researchers use for this is "confirmation bias." It simply means that people key in on information they agree with, or they even interpret information they didn't seek out in a way that syncs with their opinions.

Another term is "selective exposure, perception and retention." Again, that simply means we prefer information that we agree with, and even if we don't agree, we selectively "perceive" parts so that we do agree. And, not surprisingly, we're most likely to retain info we agree with.

Those natural confirmatory tendencies can run headlong into the Newsy-Ipsos findings that most Americans want more unbiased options, yet a majority says it's impossible for media outlets to be completely unbiased.

That made us wonder: If we ran into "fair" news in the age of loud, bickering punditry, would we even recognize it? Are we now primed to see everything as unfair?

It's critical that we fix this.

Journalists have a part to play prioritizing facts over playing fans' favorite tunes. And everyday consumers would benefit from examining their own brain filters, plus seeking out challenging, factual information.