Exam Shows Obama's Weight Is The Lowest Of His Presidency 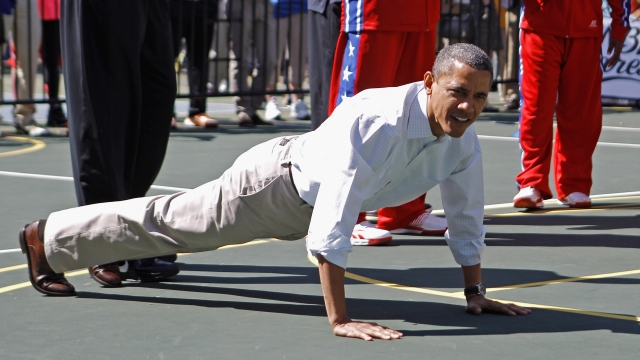 SMS
Exam Shows Obama's Weight Is The Lowest Of His Presidency
By Ryan Biek
By Ryan Biek
March 9, 2016
The president reportedly lost 5 pounds since his last physical exam in 2014.
SHOW TRANSCRIPT

Healthwise, President Obama is finishing his time in the Oval Office strong –– recording his lowest weight so far as chief executive.

The president reportedly lost 5 pounds since his last physical exam in 2014 and somehow gained a half-inch in height.

His doctor wrote in a memo Tuesday, "All clinical data indicates that the president is very healthy." Obama's body mass index of 22.8 falls within the normal range, and his resting heart rate of 56 beats per minute resembles that of a well-trained athlete, according to the American Heart Association.

Maybe his secret is all the time he's spent playing golf. By last August, the president had played 247 rounds –– more than 1,000 hours of the sport during his time in office, according to CBS' White House correspondent.

He does seem to spend a lot of time riding in a cart, though. Basketball is likely his go-to sport when he wants to get his heart rate up.

But the real reason for his improved health may be closer to home. First lady Michelle Obama's promotions for healthier eating have been one of her biggest political contributions, and she says her family tries to practice what they preach.

This video includes clips from The White House, Let's Move, ABC and CNN.