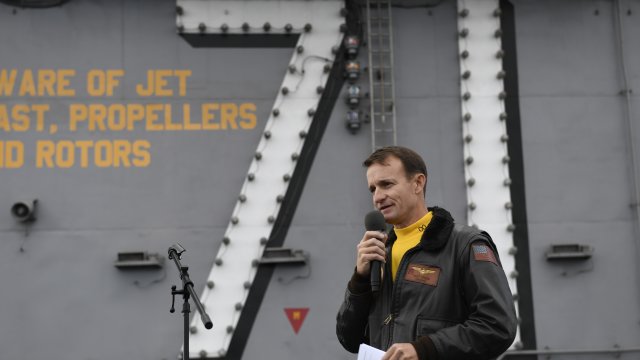 SMS
Former USS Theodore Roosevelt Captain Tests Positive For COVID-19
By Briana Koeneman
By Briana Koeneman
April 6, 2020
Brett Crozier was fired over a letter he wrote to Navy leaders suggesting some 50 sailors could die from the coronavirus.
SHOW TRANSCRIPT

The U.S. Navy captain who was relieved from command after raising concerns about COVID-19 spreading on his ship has reportedly tested positive for the virus himself.

Anonymous sources confirmed Capt. Brett Crozier's diagnosis to The New York Times. They said he started showing symptoms before he was removed from the USS Theodore Roosevelt aircraft carrier. The Navy hasn't commented on the report.

As Newsy previously reported, Crozier was fired over a letter he wrote to Navy leaders suggesting some 50 sailors could die from the coronavirus.

Acting Secretary of the Navy Thomas Modly said Crozier's letter "created a panic" among the ship's 5,000 crew members and their families. He said while Crozier was "absolutely correct" in raising concerns, the way he went about it showed "extremely poor judgment."

Defense Secretary Mark Esper told CNN 155 sailors from the USS Theodore Roosevelt have tested positive for COVID-19, and more than half of the ship has been tested. There haven't been any hospitalizations so far.