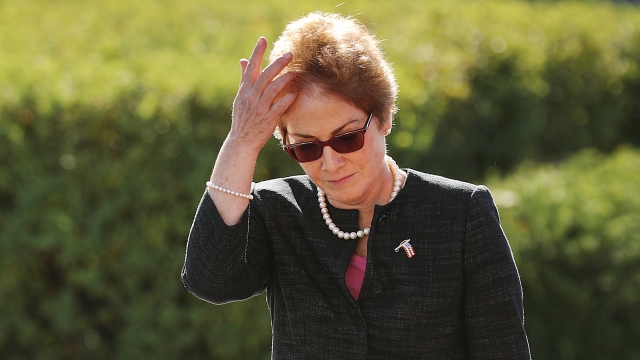 SMS
​Former U.S. Ambassador To Ukraine Marie Yovanovitch To Testify Friday
By Ahmed Jawadi
By Ahmed Jawadi
November 13, 2019
The career diplomat has testified about a "concerted campaign" to get her fired and said some of the president's comments made her feel "threatened."
SHOW TRANSCRIPT

Most of the American public probably hadn't heard of the former U.S. Ambassador to Ukraine Marie Yovanovitch prior to the impeachment inquiry into President Donald Trump.

Yovanovitch is next in line to testify this week in the House investigation into whether President Trump abused his power when he asked Ukraine's leader to investigate Joe Biden and his son during a now-infamous phone call on July 25.

Before we get into how Yovanovitch ended up as one of the figures spotlighted in the inquiry, here's some background:

In October, Yovanovitch testified to the House committees on intelligence, oversight and foreign affairs that a Ukrainian official told her Rudy Giuliani, the president's attorney, had orchestrated a "concerted campaign" to fire her over allegations that she criticized the president — something she's denied doing. When she asked U.S. Ambassador to the EU Gordon Sondland for advice on what to do, she says he told told her to "tweet out there that you support the president;" which she says she couldn't see how she could "implement in [her] role as an ambassador and as a foreign service officer."

Yovanovitch said she was told she'd be removed from her post just a few days after Volodymyr Zelenskyy won the Ukrainian presidency. She said the move left her confused, as then-Deputy Secretary of State John Sullivan told her she'd done "nothing wrong," but that President Trump had wanted her out since 2018.

She also said she was "shocked" to learn her name was brought up in the White House memo summarizing the July 25 phone call. According to the memo, President Trump referred to her as "bad news" and said "she's going to go through some things." Yovanovitch said she didn't know what the president meant by that comment, but that it left her feeling "very concerned" and "threatened."

Yovanovitch will publicly testify Friday in front of the House Intelligence Committee. Eight more witnesses are scheduled to testify before the committee next week.