Former Presidents Are Joining Forces For A Good Cause 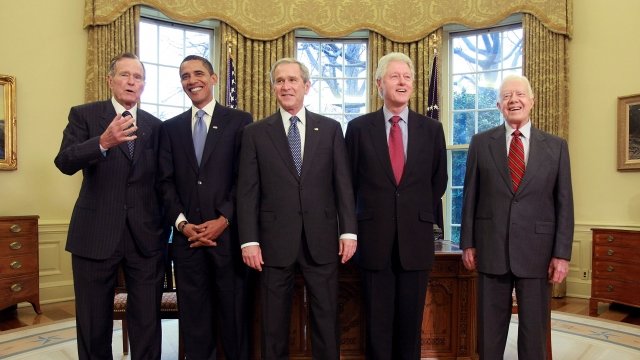 SMS
Former Presidents Are Joining Forces For A Good Cause
By Katherine Biek
By Katherine Biek
September 8, 2017
The five living, former U.S. presidents created the One America Appeal to raise money for hurricane victims.
SHOW TRANSCRIPT

The five living, former U.S. presidents joined forces and created an initiative called the One America Appeal to raise money for victims of Hurricane Harvey.

"Hurricane Harvey brought terrible destruction, but it also brought out the best in humanity," former President Bill Clinton said in a public service announcement for the One America Appeal.

Former President George W. Bush said: "People are hurting down here, but as one Texan put it, we've got more love in Texas than water."

Harvey struck southeast Texas as a Category 4 hurricane Aug. 25. It rained trillions of gallons of water over the Lone Star State, and one area east of Houston saw a record of nearly 52 inches of rain. The storm eventually moved into Louisiana before dissipating.

A special account was set up through the George H. W. Bush Presidential Library Foundation to collect money donated to the One America Appeal. 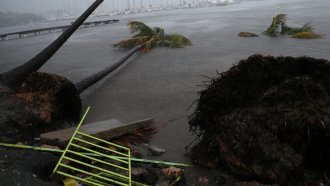 Donations to the One America Appeal will be distributed to two charities: the Rebuild Texas Fund and the Houston Harvey Relief Fund.

President Donald Trump supported the appeal in a tweet Thursday, writing, "We will confront ANY challenge, no matter how strong the winds or high the water."

Despite sometimes being on different sides of the political aisle, presidents tend to come together to help after natural disasters.

After the 2010 earthquake in Haiti, Clinton and George W. Bush raised almost $55 million for relief efforts through the Clinton Bush Haiti Fund.

The One America Appeal will eventually expand to raise money for victims of Hurricane Irma. The storm was a Category 5 when it hit multiple islands in the Caribbean, and it's expected to make landfall in Florida this weekend.