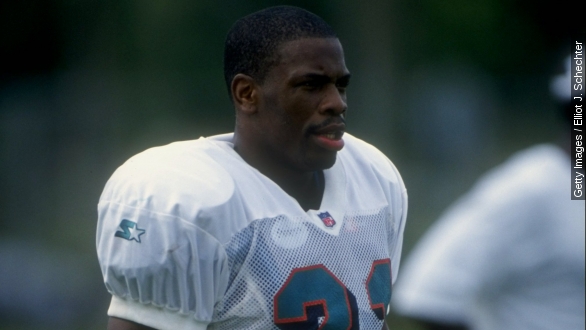 Former NFL running back and University of Nebraska standout Lawrence Phillips is reportedly a suspect in the death of his prison cellmate.

According to multiple outlets, Phillips is suspected of murdering 37-year-old Damion Soward at a California prison early Saturday morning. Soward, a convicted murderer serving 82 years behind bars, was found unresponsive in his cell. (Video via KGPE)

Thirty-nine year old Phillips has had multiple run-ins with the law and is currently serving a 31-year sentence.

In the 1990s, Phillips helped the University of Nebraska win a pair of national championships before going pro. He was picked sixth by St. Louis in the 1996 NFL draft.

He spent time with the Rams, Dolphins, 49ers and also played in the Canadian Football League, though his off-field troubles cut his playing days short.

Officials also say there was another murder in the same California prison Saturday. In that case, police believe the victim's fellow inmate is also the primary suspect in the killing, though it's unclear if the two incidents are related. (Video via KGET)