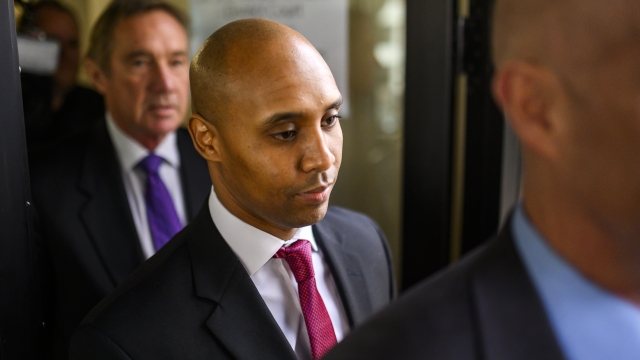 SMS
Ex-Minneapolis Officer Sentenced To 12.5 Years For 2017 Fatal Shooting
By Ahmed Jawadi
By Ahmed Jawadi
June 7, 2019
Former Minneapolis police officer Mohamed Noor was sentenced to 12 and a half years in prison for the fatal shooting of Justine Damond in 2017.
SHOW TRANSCRIPT

A former Minneapolis police officer who fatally shot an unarmed woman in 2017 has been sentenced to more than a decade behind bars.

On Friday, ex-police officer Mohamed Noor was sentenced to 12 and a half years in prison. Per the sentence, Noor must serve two-thirds of it before he is eligible for parole.

Back in April, a jury convicted Noor of third-degree murder and second-degree manslaughter for the 2017 death of Justine Damond. Damond had called 911 in the middle of the night, reporting a possible rape in the alley behind her house. Noor and his partner were sent to check out the area and determined there was no immediate threat. But after hearing a noise outside the car, both officers drew their pistols. Noor fired out the driver's side window from the passenger seat, hitting Damond in the stomach. She was unarmed and died at the scene.

Noor testified he fired the shot out of fear for his and his partner’s lives. Both Noor and his partner were wearing body cameras that night, but neither were turned on when the incident occurred.

Before receiving his sentence, Noor apologized to Damond’s family, saying he "will never be able to make up for the loss that [he] caused" and will "have to live with it for the rest of [his] life."

In addition to Noor's sentence, the city of Minneapolis will pay $20 million to Damond's family.