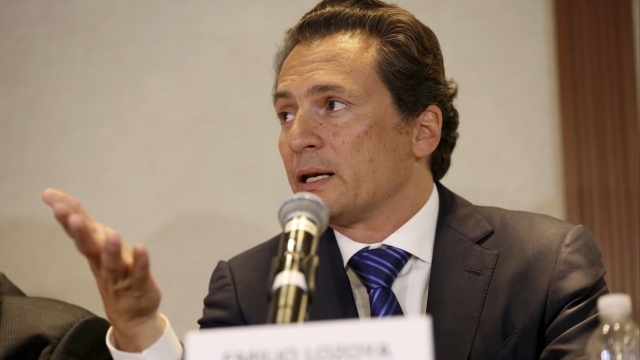 One of Mexico's most powerful figures in business and government has been extradited from Spain to face charges that he accepted millions of dollars in bribes as Mexico's top oil executive.

The extradition of Emilio Lozoya on Thursday sent political shock waves through Mexico, a country with a notorious history of official corruption.

From 2012-2016, Lozoya was the chief executive of Mexico's state-run oil company, Petróleos Mexicanos, or Pemex. He was also a close adviser to former Mexican President Enrique Peña Nieto, who left office in 2018.

Peña Nieto has not been charged with a crime. But Lozoya was indicted in Mexico for allegedly accepting as much as $10 million in bribes from a Brazilian construction company seeking petrochemical industry contracts.

The Odebrecht firm was prosecuted in the U.S. in what federal authorities called the "largest foreign bribery case in history." It agreed to pay a $3.5 billion fine in 2016 for allegedly shelling out hundreds of millions in bribes to government officials around the world.

Some of the alleged Odebrecht bribes to Lozoya occurred when he was the international coordinator for Peña Nieto’s campaign. He later became the face of the president's push to modernize Pemex, which Lozoya touted before the World Economic Forum in 2015.

By the time he was arrested in Spain, Lozoya had also been accused of taking a $3.5 million bribe to direct Pemex to buy a Mexican fertilizer plant and of diverting political funding to buy a nearly $2 million home.

Mexican President Andrés Manuel López Obrador said Lozoya agreed to extradition and now promises to tell authorities all about the (quote) "alleged frauds he is accused of." If so, Mexico and its business and power elite may be closely watching for what he has to say.