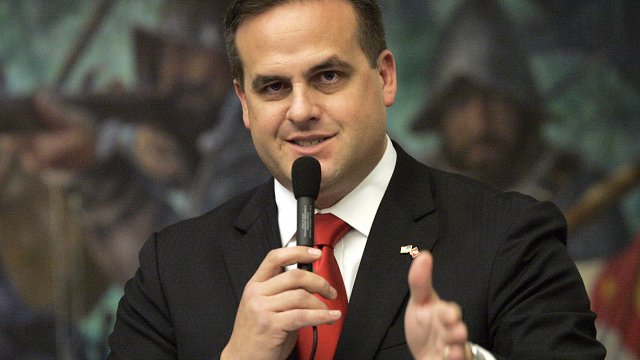 A former Florida state lawmaker has been arrested. Frank Artiles is now accused of funding a sham candidate in an upset election.

Rundle said, "He knew then and we are alleging that he knows now, that he was blatantly thumbing his nose at the law."

Last November, incumbent Democrat Jose Javier Rodriguez lost his key state senate seat by just 32 votes. A race, he tells CNN, he would have won: "There's no question that this had an impact on a race that was ultimately decided by 32 votes out of nearly a quarter million cast."

"We've been looking for Alex, is he around?"

Alex Rodriguez: "No, he'll be back tomorrow, though."

That's actually Alex Rodriguez behind the door, lying to a reporter from CNN affiliate WPLG about his own identity last year.

Alex Rodriguez told officials Artiles paid him nearly $45,000 to be a so-called ghost candidate. He was promoted as a liberal in advertising mailers but never campaigned and never debated Jose Javier Rodriguez.

"In addition to the same surname, there was also a very well orchestrated and funded last-minute campaign to persuade voters and frankly trick them."

While entering a sham candidate into a political race isn't a crime, the funding of one is, according to prosecutors. Both Artiles and Rodriguez are charged with three felonies each.

Rundle: "What is a crime is making illegal campaign contributions to get a candidate to run."

The Republican challenger who won the election by just 32 votes is Ileana Garcia, a founder of Latinas for Trump. Prosecutors say there's no evidence she knew anything about the plot to get her elected. Her spokesperson telling CNN she's never even met Frank Artiles.

Artiles' attorney tells CNN his client is cooperating and "we fully intend to defend any charges in court."

This case is part of a pattern CNN previously reported on last year — three races with ghost candidates supported by political action committees that all registered at the same time and had similar donations and similar spending on nearly identical mailers. José Javier Rodríguez said, "There was also hundreds of thousands of dollars of dark money, we still don't know where it came from, sending mailers to voters in the district to confuse them with Democratic-leaning messages."