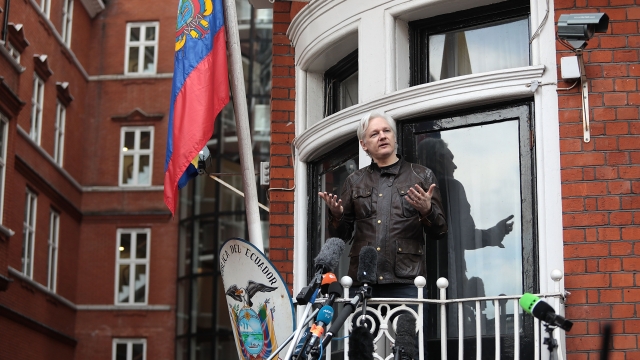 Rafael Correa leveled that allegation after an investigative report by CNN said Assange was meeting with Russian citizens and media officials as well as an alleged computer hacker.

CNN says that alleged hacker was mentioned in special counsel Robert Mueller's report as a potential courier for documents stolen from the Democratic National Committee.

In an interview with the network Tuesday, Correa said Ecuador knew Assange was using the embassy as a command center for impacting the U.S. election.

Correa told CNN: "We did notice that he was interfering in the elections, and we do not allow that because we have principles, very clear values, as we would not like anyone to interfere in our elections."

It was Correa who granted political asylum to Assange in 2012, allowing the Australian citizen to take refuge in the embassy to escape extradition to Sweden on sexual assault charges. Assange has denied those allegations.

Correa's statements that he was protecting Assange from "political persecution" burnished the Ecuadorian president's standing as a Latin American leader willing to stand up to the U.S.

His successor, Lenín Moreno, revoked Assange's asylum in April, allowing him to be removed from the embassy to face U.S. charges.

The U.S. charged Assange with conspiracy to commit computer hacking. That stems from the release of classified documents by former Army intelligence analyst Chelsea Manning and those documents' publication on WikiLeaks.

Assange currently faces no charges related to the 2016 election and denies any ties to Russian intelligence agencies.