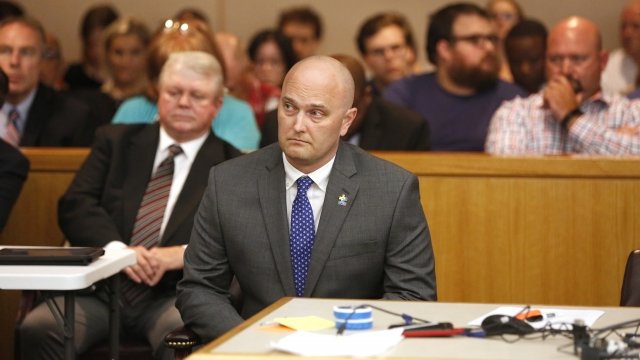 SMS
Ex-Cop Sentenced To 15 Years In Prison For Killing Black Teenager
By Katherine Biek
By Katherine Biek
August 30, 2018
Roy Oliver shot and killed 15-year-old Jordan Edwards in late April 2017 when Oliver fired at a car the teen was riding in.
SHOW TRANSCRIPT

A former Texas police officer was sentenced to 15 years in prison for the shooting death of an unarmed black teenager.

Oliver shot and killed 15-year-old Jordan Edwards back in late April 2017 when Oliver fired at a car the teen was riding in. Oliver's lawyers claimed he fired into the vehicle to protect his partner. He was fired from the Balch Springs Police Department days after the shooting.

Oliver was found not guilty of two lesser charges — manslaughter and aggravated assault.

The murder conviction is a big deal, though. Data compiled by a Bowling Green State University associate professor show that between 2005 and mid-April 2017, 59 non-federal police officers were arrested and tried for on-duty fatal shootings. Of the 28 officers who'd been convicted — only five were for murder. And four had already been overturned on appeal.

After Oliver's sentence was handed down, the Edwards' family attorney said prosecutors did a "tremendous job."

"We all would have liked to have seen a greater sentence, but we’re going to respect the verdict that the jury handed down, only because we know that there are parents all over this country who would love to see the person who took the life of their kid spend the next 15 years in prison,” Daryl Washington said.

Oliver's legal team says it plans to appeal the verdict.