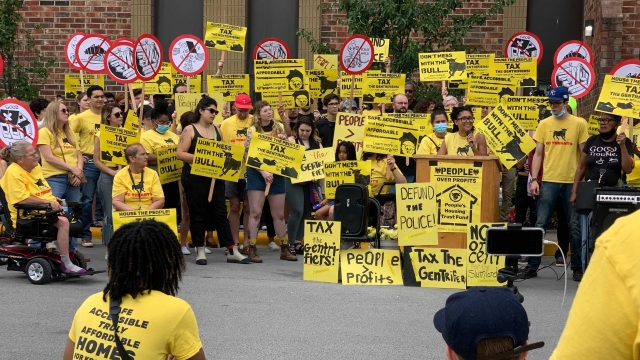 "I'm three months behind on my rent and I don't have any way to pay them two thousand dollars."

Simone Dennis is a single mom with a four-year-old and a baby on the way. After COVID shut down schools in Kansas City, she had to leave her job in order to take care of her son and hasn't been able to pay rent since.

"I've been very, very stressed out worrying every month whether or not I'm going to get an eviction notice," Dennis said.

Dennis has been able to stay in her house thanks to the federal eviction moratorium. Originally set to expire June 30, the Biden administration has extended it for another month, but said this time is the last time.

The White House says the final extension will allow time for states to distribute rental assistance and enact programs to stabilize housing for the over 7 million Americans currently behind on rent.

The extension is a relief for Dennis for now. But she still doesn't have a way to pay the rent. Federal rental assistance she’s eligible for hasn't come.

Landlords say those delays are a problem for them. They say without emergency funds being disbursed, the extension is just kicking the can down the road.

"We keep hearing about a tsunami of evictions, but we say there's a tsunami of rental assistance out there," Stacey Johnson-Cosby said. "And if the focus can be on getting that money that's out there into the hands of those that need it, we won't have to worry about an eviction crisis."

She says a handful of her tenants have fallen behind on rent during the pandemic. She's been working with them to get rental assistance, but the process has become more challenging in recent months. She says it can take four to six weeks to get money.

"Our goal is never to evict," Johnson-Cosby said. "Evictions cost us money."

At a rally in Kansas City, activists argued rental assistance hasn't really been helping renters and proposed a "People's Housing Trust Fund" to redirect the money to affordable housing.

"It's not really renter's assistance," Gary Thomas, who attended the rally, said. "What it is, is landlord assistance. It doesn't really help the renters get out of any circumstances that they were put in through a pandemic. What it does is pay the landlords money."

Dennis hasn't had a job, or a paycheck, since February. She's hopeful she'll get her rental assistance soon but knows time is running out.