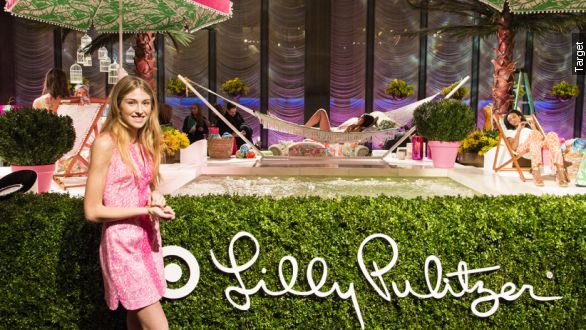 Over the weekend, Target launched its most anticipated collaboration in years, and unfortunately for the retail giant, things did not go smoothly.

"Target is apologizing it disappointed customers after extreme demand for its Lilly Pulitzer collection," a CBS anchor said.

"Target had to take down its website for a time to slow down the online traffic," a KTVK anchor said

Tamron Hall read a tweet that said, "Don't call it a collection if it will only be available for 5 minutes on one day, that's called a flash sale."

The buzz for Target's Lilly Pulitzer collection was trending online overnight while people tweeted pictures of the incredibly long lines. Perhaps because of all that buzz, Target had an extremely hard time keeping up with demand. Target even had to take down its entire website at one point for about 20 minutes to deal with the heavy traffic. Many compared the frenzy at Target stores and how quickly items sold out Sunday to the Black Friday madness.

The majority of items online were sold out before brick and mortar stores even opened for the day. Target offered updates on its Twitter account on when customers could shop the Pulitzer line.

First, Target tweeted the launch was "close" shortly after 1 a.m. Eastern Time. But it wasn't until nearly 5 a.m. when Target tweeted that the collection was actually available online saying, "We know you're frustrated & we're sorry. We appreciate your patience. You can now shop the #LillyforTarget collection."

Buying Lilly Pulitzer's bold colorful patterns from its home website can be expensive. At retail, the preppy fashion can cost customers anywhere from to $100 to $300 for a dress. The Target line however was offering the same styles for a fraction of the price.

Which has led many who were able to get their hands on the discounted items to turn around and sell them on eBay for a profit. Target spokesman Joshua Thomas told USA Today, seeing the items pop up on eBay is "really disappointing"

Many outlets are comparing what happened Sunday with another Target collaboration — that with Missoni in 2011. Heavy online demand for the collection crashed Target's website more than once, the items sold out in a matter of hours — and, similar to the Pulitzer launch, once the items sold out, they were not restocked.

But Fortune argues this launch should have been different: "Target knew demand would be huge for the collection. Throw in the intelligence that the company presumably got from social media ... along with the big investments it has made in recent years in the website, and the Pulitzer snafu seems all the more confounding and embarrassing."