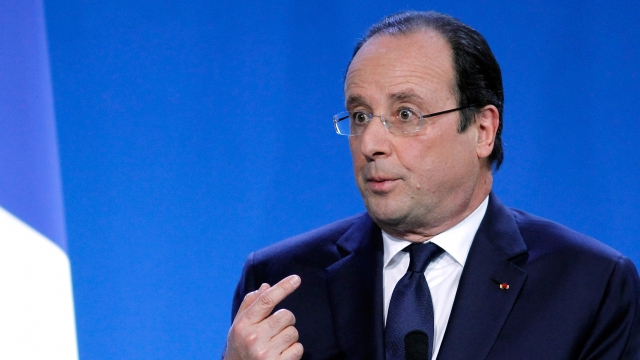 How much would you pay to have a hairstyle like French President François Hollande? $15? Maybe $20? Well, if you're a French taxpayer, the bill for your president's haircut is more than $130,000 per year.

A French satirical magazine revealed that Hollande's personal barber, referred to as Olivier B., has a salary of 9,895 euros per month. That's nearly $11,000 in America, and a really bad deal worldwide.

Olivier's lawyer tried to justify the exorbitant salary by telling France 24 that he must be "available for the president 24/7," cutting Hollande's hair every morning and before each speech.

Olivier's lawyer says the barber even missed the birth of his children because of his job. But all we really got out of the story is that he makes enough money to keep a lawyer on retainer.

It's, of course, odd that a barber makes almost as much as a cabinet minister. It's even worse when you consider that Hollande doesn't even have that much hair to cut.

Twitter users noticed that Hollande's hairstyle doesn't quite have the je ne sais quoi that would require a six-figure hairstylist, so they photoshopped some 'dos that might make the salary worth it. The scandal even has its own hashtag: #Coiffeurgate or Hairdressergate.

Hollande isn't the only head of state whose barber bill is a little much. President Barack Obama reportedly has his long-time barber from Chicago flown out to Washington, D.C., for a touch-up every two weeks.

In 2012, Examiner estimated that would cost $7,200 in airfare per year. The barber charges Obama just $21 for the cut, same as everyone else. Let's hope Obama at least tips well for his trouble.

This video includes clips from France 24, the White House and Europe 1 and images from Getty Images. Music provided courtesy of APM Music.