Worried About Forgetting Your Vaccine? A Reminder Card Is Coming 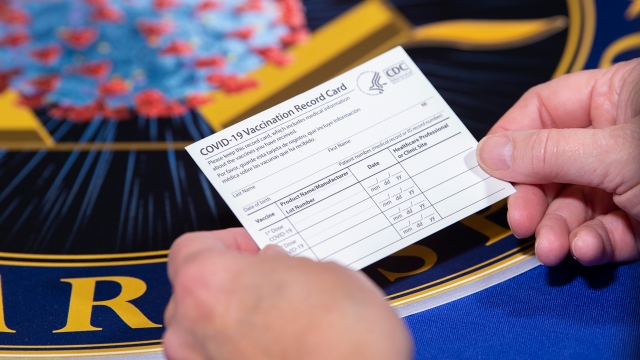 SMS
Worried About Forgetting Your Vaccine? A Reminder Card Is Coming
By Alex Arger
By Alex Arger
December 5, 2020
The card will list information on vaccine shots and who administers them.
SHOW TRANSCRIPT

Health officials have decided on a simple way to help Americans keep track of their COVID-19 shots. Each person getting the vaccine will get a wallet-sized card to serve as a reminder for when a second shot is due.

The cards will also list information about shots administered, including the date and who injected the vaccine. It's part of vaccination kits developed by the CDC, Department of Defense and Operation Warp Speed that will also include syringes, needles, a surgical mask and a face shield.

These reminder cards could come in handy for both of the vaccines awaiting emergency use authorizations in the U.S. Pfizer's requires a second dose 21 days after the first, and Moderna requires one 28 days after.

States will also run their own tracking and notification systems to make sure Americans are following up on their first shots. And many vaccination clinics are planning to ask patients to provide cell phone numbers so that they can get a follow-up text telling them when and where to get their second dose.

The cards aren't intended to be used as a "vaccination passport" to get into bars, shops or airports in the U.S. However, some countries are discussing electronic verification systems to confirm travelers have a negative test result or have gotten the vaccine before flying.

The FDA is expected to discuss the emergency use authorizations on December 10 and 17. Then the first vaccine shipments could happen days after. If both get authorized, the U.S. would have enough doses to fully vaccinate 20 million people by the end of this year, with the remaining population having to wait as more doses are made available over ensuing months in 2021.