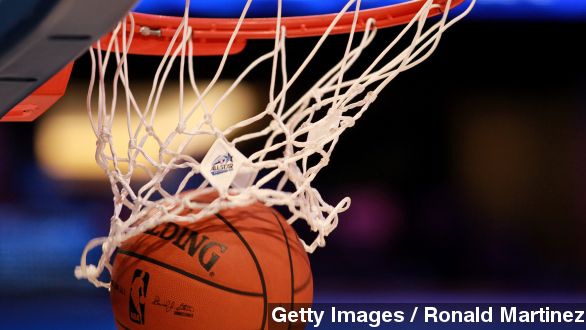 With an extra $1.7 billion floating around the NBA, big changes are coming to professional basketball which could affect players, owners and fans.

Two years before it goes into effect, Adam Silver has announced the highly-anticipated new television deal between the NBA, ABC, ESPN and Turner Sports.

The deal will run from the 2016 season through 2025 and will only cost Ted Turner and the Walt Disney Company around $2.6 billion a year. For those of you keeping count, that's almost three times the current deal which is closer to $930 million per year.

And with an extra $1.7 billion floating around the NBA, there are big changes coming to professional basketball, changes that could potentially be exciting for players, owners and, in the not so distant future, fans.

First and foremost, the players and the all important salary cap. "That money is going to go crazy so the salary cap is going to increase dramatically."

Players like Lebron James, Kevin Love and Kevin Durant all have current NBA contracts ending just in time for the new TV contract to take effect, so they will be able to sign deals that could have much higher ceilings.

And while NBA owners will be forced to pay more, they will also have more — much more.

As SB Nation points out, "This new TV deal won't just pump more dough into player salary — half of it will essentially go toward the NBA's bottom line. ... Assuming the league really is breaking even right now, the new TV deal would allot about $30 million in profit per season for each team."

Next up is the fans. In the short term, the new deal will provide fans around the country with more televised games. There will be an extra 15 regular season games aired on ESPN and another 12 after the all-star break on TNT. (Video via ESPN)

What could be even more exciting for NBA fans, though, is a possible á-la-carte option for live NBA games which was alluded to in the new deal but not really explained.

ADAM SILVER VIA CNBC: "There's a demand to get live games on mobile devices, but it will ultimately supplement the premium content we're providing."

ESPN business reporter Darren Rovell explains the potential of over-the-top programming, "Imagine a person in Beijing buying a season of team games for his phone or broken down even smaller to particular highlight packages or maybe even paying for a quarter of live action on the spot. ... That's all possible."

But some claim this potential approach will backfire. "You can't have your cake and eat it too. You can't ask the cable subscribers to pay monthly when it's available at such volume over-the-top."

By the time this new contract is up, the NBA will have been in business with ESPN for 23 years and Turner Broadcasting for 41 years.