Even Black Holes Have Their Limits, Study Says 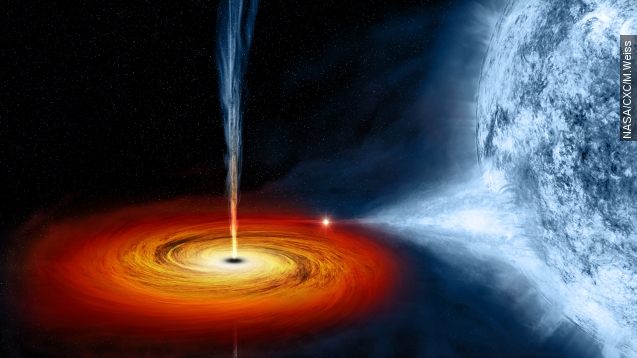 SMS
Even Black Holes Have Their Limits, Study Says

By Ryan Biek
December 20, 2015
Researchers from the University of Leicester say there's a limit to how big a black hole can get before it stops growing.
SHOW TRANSCRIPT

Black holes have long sparked imagination and fear, but according to a new study there could be a limit to just how massive these giants can get.

First, what is a black hole? Put simply, it's a place where gravity is so strong, not even light can escape. Scientists can tell one exists by measuring gravity's effects on nearby planets. (Video via NASA)

Dr. Andrew King of the University of Leicester recently calculated the maximum size of a black hole: 50 billion times the mass of the sun. (Video via NASA)

King says any larger and the black hole's outer disk won't form, which keeps the hole from growing.

The only way the black hole could grow beyond 50 billion suns would be for two black holes to merge, or by a star falling into one. (Video via NASA)

At the center of every large galaxy, including the one we live in, lies a supermassive black hole.

Because they usually grow in tandem, knowing black holes' limits could help us learn those of galaxies.