Evangelicals Are Trump's Rock-Solid Base. So Who Are They? 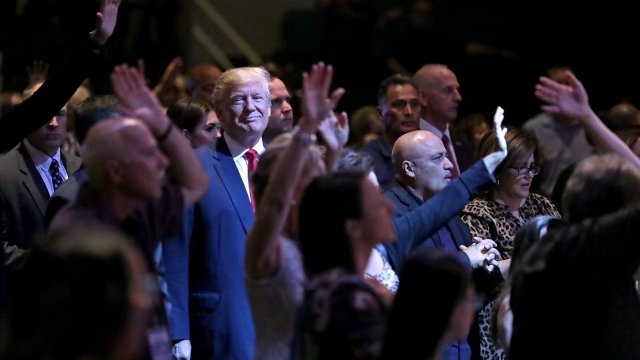 Not just from the pulpit or TV but at the voting booth. This group can sway entire elections. So what exactly is evangelical Christianity?

— Conversion: Jesus Christ's death on the cross is the only sacrifice able to wipe away sin. This is the "born again" experience.

— Biblical supremacy: The Bible is the highest moral authority.

— Evangelizing: Taking the gospel to the ends of the Earth, converting sinners.

— And then, exclusivity: Only those who've been "saved" through Jesus are granted eternal salvation.

When it comes to politics and society, most pollsters simply ask: "Do you consider yourself an evangelical or born-again Christian?" 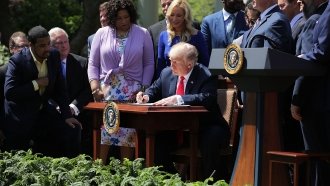 And they often add the modifier "white," as in "white evangelical," which makes up about three-quarters of the denomination. Here's why that's important:

Given the attention white evangelicals received in 2016, it's hard to believe that their numbers in the U.S. seem to be dwindling. But that's what a Public Religion Research Institute poll found: Fewer than 1 in 5 (17 percent) Americans are white evangelical Protestants, but they accounted for nearly one-quarter (23 percent) in 2006.

The story is just the opposite in Latin America. Just 1 in 10 Latin Americans (9 percent) were raised in evangelical Protestant churches, but nearly 1 in 5 (19 percent) now identify as such. Meanwhile, Catholicism, historically the dominant religion in Latin America, is losing members.

Back in the U.S., white evangelicals form the rock-solid base of President Trump's political career. It was firm on Election Day 2016. Exit polls found 80 percent voted for Trump.

And in mid-2018? Still solid as a rock, a PRRI poll found. A few notables in that poll from PRRI: Trump's favorability among white evangelical women is 71 percent. In men, that's 81 percent. White evangelicals with a college degree put his favorables at 68 percent, but that jumps to 78 percent among those with less education.

So what's the 2020 election looking like? An overwhelming majority of evangelicals want Trump — and only Trump — as the GOP nominee, making them a faithful flock and more crucial to Republicans than ever.