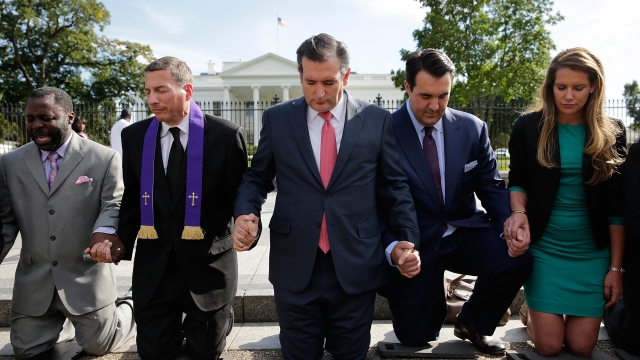 SMS
Evangelical Voters Are Confusing Pundits In Iowa
By Kate Grumke
By Kate Grumke
January 30, 2016
Their support for a certain thrice-married billionaire is making this election different than previous ones.
SHOW TRANSCRIPT

When it comes to the Iowa caucuses, one group of voters is on everyone’s minds.

“We have to turn out the evangelical vote. If we don’t, we’re toast, and that’s the gospel truth.”

“And evangelical voters could make all the difference in Iowa,” George Stephanopoulos said.

“The key to winning the Iowa caucuses is support from evangelicals.”

So who are these all-important voters?

Well, they’re the largest religious group of American adults. In 2014, about 25 percent of adults identified as evangelicals. And while the rest of the U.S. is getting less religious, this group is staying about the same.

Oh, and in case you haven’t noticed — in Iowa they dominate conservative politics. In 2012, they made up an estimated 60 percent of likely caucusgoers.

But this election season, those evangelical voters have been confusing a lot of observers because of one person — Donald Trump.

Unlike Ted Cruz and Ben Carson, the thrice-married billionaire has had trouble naming Bible verses and talking about his beliefs

And yet, a surprisingly large share of evangelical Iowans support Trump — about 24 percent. That makes him about even with Cruz.

But then again, what evangelical voters care about might not be that different from the rest of the GOP.

But that could also mean evangelical voters are so important, they drive Republican trends. Either way, some seem to gravitate toward Trump.