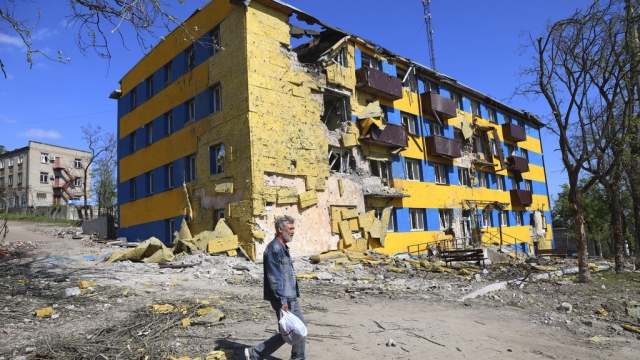 A long-awaited effort to evacuate people from a steel plant in the Ukrainian city of Mariupol was underway Sunday, the United Nations said.

U.N. humanitarian spokesman Saviano Abreu told The Associated Press that the operation to bring people out of the sprawling Azovstal steel plant was being done with the International Committee of the Red Cross and in coordination with Ukrainian and Russian officials.

As many as 100,000 people are believed to still be in blockaded Mariupol, including up to 1,000 civilians who were hunkered down with an estimated 2,000 Ukrainian fighters beneath the Soviet-era steel plant — the only part of the city not occupied by the Russians.

Like other evacuations, success of the mission in Mariupol depended on Russia and its forces, deployed along a long series of checkpoints before reaching Ukrainian ones.

Zaporizhzhia, a city about 141 miles northwest of Mariupol, was the destination of the evacuation effort, Abreu said. He said women, children and the elderly — who have been stranded for nearly two months — will be evacuated to the city, where they will receive immediate humanitarian support, including psychological services.

Mariupol has seen some of the worst suffering of the war. A maternity hospital was hit with a lethal Russian airstrike in the opening weeks of the war, and hundreds of people were reported killed in the bombing of a theater where civilians were taking shelter.

"As the operations are still ongoing, we will not provide further details at this point, to guarantee the safety of the civilians and humanitarians in the convoy," Abreu said of the evacuation.

"The U.N. will also continue to push for the safe passage out of Mariupol city for all those civilians who wish to leave," he said.

The U.N. said the convoy to evacuate civilians started on Friday, traveling some 140 miles before reaching the plant in Mariupol on Saturday morning.

Ukrainian President Volodymyr Zelenskyy said in a tweet Sunday afternoon that the first group of about 100 people was headed to Ukrainian-controlled territory.

"Tomorrow we'll meet them in Zaporizhzhia. Grateful to our team! Now they, together with #UN, are working on the evacuation of other civilians from the plant," he tweeted.

A team with Doctors Without Borders was at a reception center for displaced people in Zaporizhzhia on Sunday, in preparation for the U.N. convoy's arrival, if successful. Stress, exhaustion and low supplies of food have likely weakened the health of civilians who have been trapped underground at the steel plant.

People fleeing Russian-occupied areas have described their vehicles being fired on, and Ukrainian officials have repeatedly accused Russian forces of shelling evacuation routes on which the two sides had agreed.