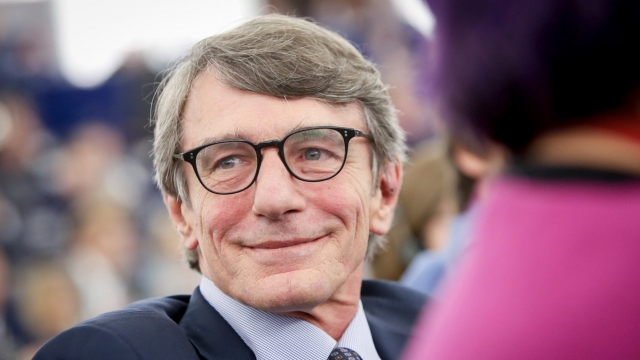 The European Parliament has elected Italian socialist David Sassoli as its new president.

Sassoli beat out three other candidates Wednesday after two rounds of voting by members of the European Parliament, winning 345 out of 667 votes. He replaces former army officer Antonio Tajani and will serve in the position for two and a half years.

In his inaugural speech, Sassoli — who's been a MEP since 2009 — touched on various topics, including fighting the "virus" of extreme nationalism in Europe and the importance of diversity.

"The value of the human individual human dignity are the benchmark against which we gauge our political efforts. No one in Europe can put down the opposition. Our institutions are the fruit of democracy of a free choice made in free elections. Nobody can be condemned for holding a particular political or religious or philosophical persuasion," Sassoli said.

Sassoli's win comes on the heels of two high-profile nominations for top spots in the EU. Germany's Defense Minister Ursula von der Leyen is poised to become the next European Commission president, and the current head of the International Monetary Fund, Christine Lagarde, has been tapped to run the European Central Bank.