European Leaders Discuss How To Handle Recent US Policy Decisions 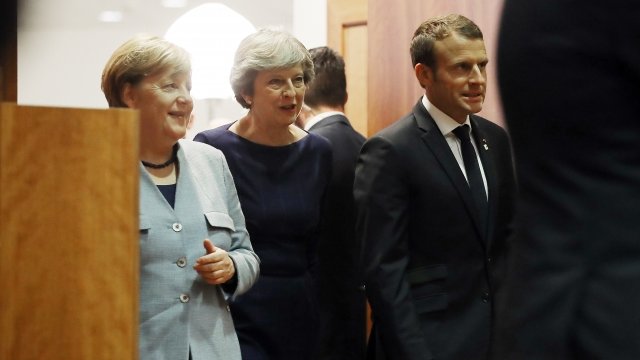 SMS
European Leaders Discuss How To Handle Recent US Policy Decisions
By Jake Jones
By Jake Jones
May 16, 2018
European leaders are meeting to address the U.S.' Iran nuclear deal withdrawal and tariffs on steel and aluminum.
SHOW TRANSCRIPT

European leaders met on Wednesday, and they say they're working on a unified approach to addressing President Donald Trump and his actions.

Looking at latest decisions of @realDonaldTrump someone could even think: with friends like that who needs enemies. But frankly, EU should be grateful. Thanks to him we got rid of all illusions. We realise that if you need a helping hand, you will find one at the end of your arm.

European Council President Donald Tusk grabbed headlines when he said the Trump administration showed "capricious assertiveness" in recent decisions, like backing out of the Iran deal and imposing steel and aluminum tariffs on several U.S. allies.

Tusk also said, "with friends like that who needs enemies" and that the European Union would have to fend for itself in days to come.

European members of the 2015 Iran nuclear deal are trying to salvage the agreement, which restricts Tehran's nuclear program. European leaders are also looking to iron out a formal, unified response to U.S. steel and aluminum tariffs, which take effect June 1.