European Court Says UK Can Unilaterally Back Out Of Brexit 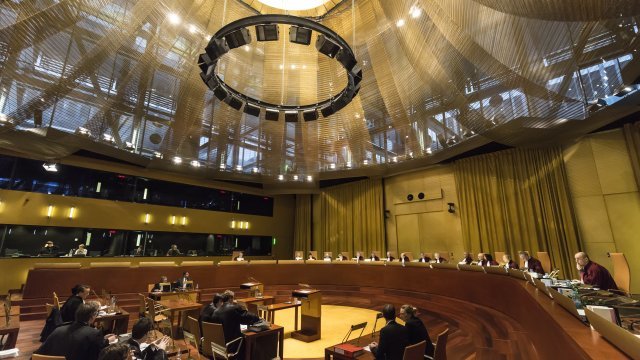 SMS
European Court Says UK Can Unilaterally Back Out Of Brexit

By Katie Cammarata
December 10, 2018
The EU Court of Justice issued a ruling Monday morning explaining that the process could be done without permission from the other 27 EU states.
SHOW TRANSCRIPT

A European Union court says the U.K. can unilaterally back out of Brexit.

The EU Court of Justice issued a ruling Monday morning explaining that the process could be done without permission from the other 27 EU states and keep the current agreements it has with the union.

According to a statement from the Court of Justice, the U.K. can change its mind as long as the two sides have not entered a withdrawal agreement, or as long as the decision is made within two years of the country letting the EU know it intended to leave. The EU court sided with the non-binding opinion of one of its senior legal officials, who, last week, said the U.K. should be allowed to stay in the bloc.

If the U.K. decides to leave the Brexit deal, it will still have to follow a democratic process, meaning Britain's Parliament will have to approve. The case will now head back to Scotland's highest court for a final decision.

The Court of Justice's decision came a day ahead of a planned vote on Prime Minister Theresa May's Brexit agreement in the House of Commons. But on Monday, May reportedly postponed the vote. She was already expected to lose by a wide margin. Campaigners against the deal hope the EU court's decision will sway even more people toward staying in the EU.