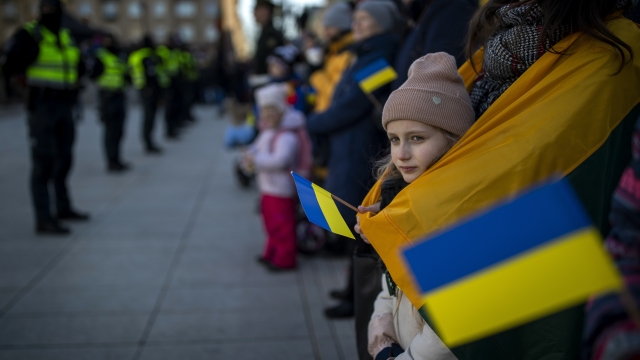 SMS
Europe's Baltic Nations Feel Renewed Fear Of Russian Aggression
By Ben Schamisso
By Ben Schamisso
March 30, 2022
The Baltic nations have been extremely supportive of Ukraine because they recognize Ukrainians are fighting for the Baltics and for all of Europe.

For countries neighboring Russia, the war in Ukraine feels alarmingly close, with tens of millions wondering if they're next.

Among the most concerned: the small Baltic nations of Lithuania, Latvia and Estonia — a region squeezed between Russia and Belarus with a long and painful history of Russian occupation.

“You hear stories of people who packed a go-bag in case they need to leave," said Krista Viksnins, a security and defense expert at the Center for European Policy Analysis.

Viksnins is a dual citizen of Latvia and the U.S. She lives in Washington, D.C., but has many worried friends and relatives in Latvia.

“People are starting to talk to relatives or friends in other countries and make plans," she said.

Like Ukraine, the Baltics were once part of the Soviet Union and are home to a sizable Russian ethnic minority.

“Mr. Putin has already said that the greatest geopolitical catastrophe of the 20th century was the collapse of the Soviet Union," said Māris Andžāns, director of the Center for Geopolitical Studies Riga in Latvia.

But unlike Ukraine, the three Baltic nations have been part of the EU and the defensive NATO alliance since 2004. That means the U.S. and other allies will come to their defense if Russia were to invade.

“We want to make sure that Russia knows that an attack on Lithuania or any other NATO article five country comes with a cost," said Gen. Mark Milley, chairman of the Joint Chiefs of Staff at the U.S. Department of Defense.

This year, the U.S. and NATO bolstered military capabilities in the Baltics and other eastern flank countries.

But experts tell Newsy that may not be enough.

“Even though Russia didn't show its best potential in Ukraine, the Baltic armed forces are far weaker than the Ukrainian ones," Andžāns said.

In a string of op-eds in English-language newspapers, Baltic leaders are calling for a permanent NATO presence and the placement of air defense systems.

Currently, NATO troops rotate in and out of eastern Europe to avoid provoking Russia.

“Rotating through means that, you know, there's transit time, et cetera," Viksnins said. "We need people that are there on the ground that know the region.”

Defense analysts are particularly concerned about the Suwalki Gap – a 60-mile strip of land between the heavily militarized Russian enclave of Kaliningrad and Belarus.

“If by chance Russia was able to seal that off, they will effectively seal off the Baltics from the rest of Europe," Viksnins said.

The Baltic nations have been extremely supportive of Ukraine because they recognize that Ukrainians are fighting for the Baltics, and for the entire European continent, too.