The EU Is Set To Begin Trade Talks With The US 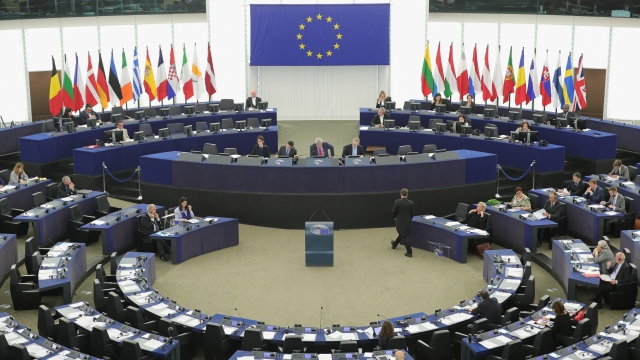 SMS
The EU Is Set To Begin Trade Talks With The US
By Ahmed Jawadi
By Ahmed Jawadi
April 15, 2019
The EU Commission just got the go-ahead to begin formal negotiations with the U.S. on two agreements.
SHOW TRANSCRIPT

The European Union said Monday it's ready to begin talks on a trade agreement with the U.S.

EU leaders gave the EU Commission the go-ahead to begin formal negotiations with the U.S. on two agreements. One seeks to "[eliminate] tariffs on industrial products," while the other wants to "make it easier for companies to prove their products meet technical requirements on both sides of the Atlantic."

EU Trade Commissioner Cecilia Malmström told reporters she would contact U.S. Trade Representative Robert Lighthizer Monday to work out a start date and said she hopes both sides can come to an agreement before the Commission's term ends in October. She also made it clear that agricultural products will not be up for discussion, even though that's a key demand of the U.S., which wants more access to the EU's farm product market.

This comes nearly a week after the U.S. threatened to slap tariffs on billions of dollars worth of EU imports as part of an ongoing battle over aircraft subsidies. EU Commission President Jean-Claude Juncker struck a deal with President Donald Trump last year that the U.S. would not impose tariffs on European cars while they worked on their economic relationship.