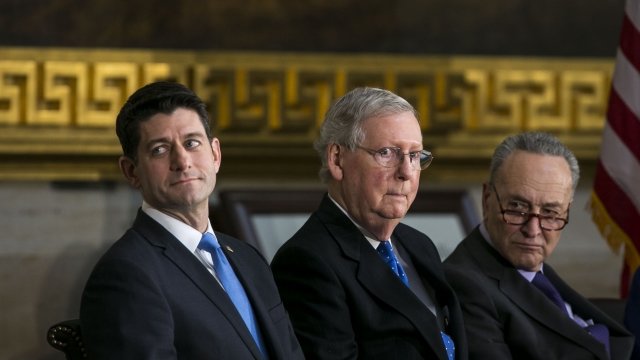 The European Union warned it would respond to a rise in U.S. steel tariffs with tariffs of its own on products in Republican-dominated states.

Shortly after President Donald Trump said on Twitter trade wars are "good" and "easy to win," European Commission President Jean-Claude Juncker said the bloc would retaliate with tariffs on Wisconsin Harley-Davidsons and Kentucky bourbon. It's not a coincidence those industries are in states where Republican leaders House Speaker Paul Ryan and Senate Majority Leader Mitch McConnell call home.

And the EU has a winning record in trade wars with the U.S. Under former President George W. Bush's first term, he imposed a similar tariff on steel imports of 8 percent up to 30 percent.

At the time, it was clear the move was for political gain and would lead to a rise in prices on numerous goods. The EU responded with tariffs on Harley-Davidsons, American-made firearms and ammunition, Florida orange juice and more.

And that strategy worked. Bush backed off and in late 2003 set the steel tariff back at its original level. The move was also damaging politically.

But a major difference is how the two presidents justified the tariffs. Bush pointed to damage done to American steel companies. That allowed the World Trade Organization to ultimately rule the U.S. broke trade deals and could face sanctions.

Trump is instead pointing to national security as his reasoning. The WTO has been less willing to tackle that defense.

Both in 2002 and now, the U.S. steel industry supported raising the tariffs.