Iran's Ultimatum Could Sink Europe's Support For The Nuclear Deal 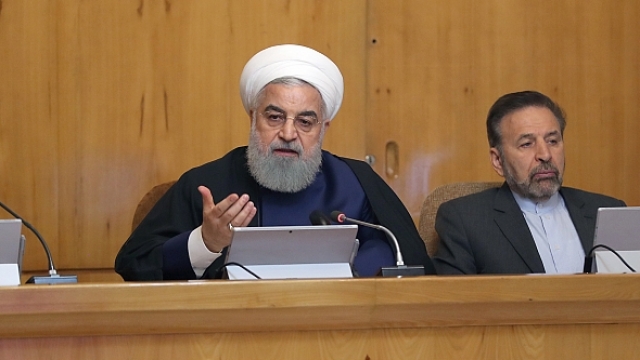 SMS
Iran's Ultimatum Could Sink Europe's Support For The Nuclear Deal
By Matt Picht
By Matt Picht
May 8, 2019
Iran's threat to withdraw from the international deal constraining its nuclear program could put the European Union in a tight spot.
SHOW TRANSCRIPT

Iran's ultimatum about restarting its nuclear program leaves European nations with an unenviable choice: either side with Iran and risk provoking the U.S.'s wrath, or abandon the nuclear deal and risk the rise of a nuclear-armed Iran.

The European Union has been trying to prop up an international deal on Iran's nuclear program, despite the unilateral withdrawal of the U.S. from the agreement last year. The agreement was brokered during the Obama administration in 2015, and requires Iran to freeze key parts of its nuclear capabilities in exchange for sanctions relief.

But the U.S. has been putting more pressure on the agreement; it recently canceled certain sanction waivers meant to help some countries purchase Iranian oil.

Now, Iran wants the remaining participants in the deal — Russia, China, France, the U.K. and Germany — to help it find a way around U.S. oil and banking sanctions. If nothing happens in the next 60 days, Iran will effectively abandon the constraints that the deal imposed on its nuclear program.

The deal's other signatories have reiterated their support for the agreement, but it's also clear some nations are forecasting the end of the nuclear deal if Iran follows through on its threats.

UK Foreign Secretary Jeremy Hunt: "I urge Iran not to take further escalatory steps and to stand by its commitments. ... Should Iran cease to observe its nuclear commitments, there would of course be consequences."

Previous EU efforts to establish an end-run around U.S. sanctions didn't really provide the kind of economic relief Iran is looking for. And many European companies don't want to risk their relationship with the U.S. by doing business with Iran.

But nixing the deal could have repercussions beyond a renewed Iranian nuclear program: the country has also hinted that U.S. sanctions cut into its ability to prevent the spread of drug trafficking and terrorism beyond its borders.

Both the U.S. and the EU have accused Iran of supporting militant groups in the region, and the U.S. has designated Iran's Revolutionary Guard military unit as a terrorist organization.

Iran might be able to turn to Russia and China, the deal's other signatories, for some economic relief. But Russia's own robust oil sector makes it uninterested in buying oil from Iran, and China's unlikely to want to antagonize the U.S. during the ongoing trade negotiations.