EU Commission Nominee Tries To Win Over A Fragmented Parliament 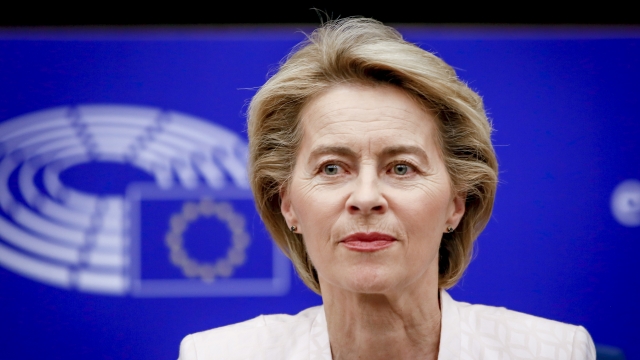 German Defense Minister Ursula von der Leyen is one election away from becoming the first-ever woman president of the European Commission — but her chances of winning are far from certain.

The European Parliament votes on her nomination on Tuesday — and even if she gets full support from her own party, von der Leyen will still need to find at least another 193 votes to win the simple majority she needs to get elected.

The two next-largest parties, Renew Europe and the Socialists & Democrats, are divided on von der Leyen. The parties are still sore over the snub of their preferred candidates for the position; von der Leyen might have to promise those candidates top jobs in her presidency in order to soothe tensions.

Von der Leyen's brief campaign has focused on winning over groups to her left: She's pledged to strengthen European institutions and focus on the environment if she's elected.

But it's fallen flat with Parliament's left-wing and environmentalist parties, who've all announced their opposition to her candidacy. The rejection denies von der Leyen just over 100 votes in total.

That just leaves the right-wing and Euroskeptic groups in Parliament, whose support could be key to bridging a gap in von der Leyen's majority. But those groups were also recently shut out of prominent committee spots in Parliament; some of their members have hinted they might vent their frustrations by withholding support for von der Leyen.

Tuesday's vote will affect not only von der Leyen's future, but the fate of nominees for the European Central Bank and the head of the EU's foreign affairs. If Parliament rejects von der Leyen, EU leaders will have 30 days to nominate another candidate.