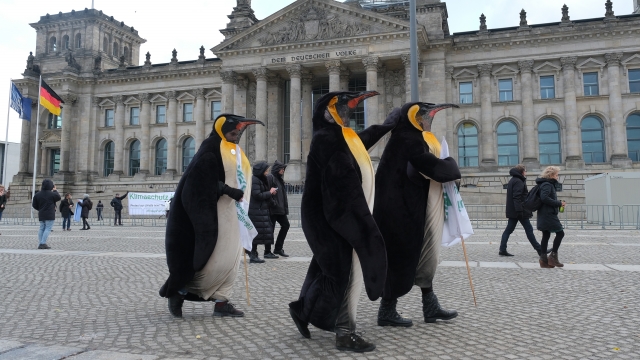 Just days before the United Nations climate conference in Madrid, the EU proposed more ambitious targets for reducing those greenhouse gases to 50% of 1990 levels. Right now, the bloc has a goal of curbing emissions to at least 40% below 1990 levels by 2030.

Ursula von der Leyen is the president-elect of the European Commission, the E.U.'s executive branch. On Wednesday, she called for a "European Green Deal" to achieve net-zero emissions by 2050 for the region of 500 million people.

She said: "If there is one area where the world needs our leadership, it is on protecting our climate. This is an existential issue for Europe — and for the world."

The climate emergency declaration comes as scientists are warning of a "state of planetary emergency."

The scientists identified destruction of the Amazon rainforest, melting of Arctic and Antaratic ice sheets, coral reef die-offs and slowing ocean circulation as part of a "cascade" of crises threatening the planet's health.

The 2015 Paris Climate Agreement calls for nations to work to limit global temperature rise this century to 1.5 degrees Celsius, or 2.7 degrees Fahrenheit. In early November, the Trump administration formally notified the United Nations the U.S. is withdrawing from the agreement.