The EU Isn't Budging On Its Brexit Deal With Theresa May 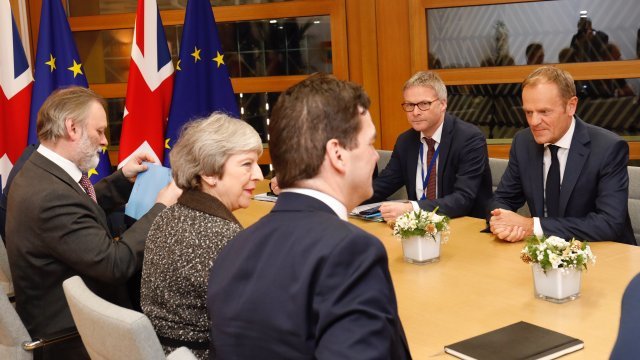 SMS
The EU Isn't Budging On Its Brexit Deal With Theresa May
By Matt Picht
By Matt Picht
December 11, 2018
European Union Ambassador to the U.S. David O'Sullivan told Newsy the E.U. doesn't have much room to renegotiate a Brexit deal with Theresa May.
SHOW TRANSCRIPT

Top European Union officials continue to send a clear message to U.K. Prime Minister Theresa May: the Brexit deal she struck with the E.U. is not up for renegotiation.

Ambassador David O'Sullivan is the E.U.'s envoy to the U.S.  He told Newsy the current deal is the only option on the table for the U.K. to smoothly transition out of the E.U.

Problem is, that deal hasn't gone over well in Parliament. The sticking point is the agreement's temporary "backstop" solution to keep the border between Northern Ireland and Ireland nearly invisible. The backstop solution is so unpopular that May was forced to cancel a planned vote of approval on the deal.

O'Sullivan told Newsy, "I don't think anyone feels there is much room to renegotiate the agreement."

"The withdrawal agreement does give I think the British people and the British Parliament a clear indication of what leaving actually means. And it does come at a cost on unfortunately, which may be was not as fully recognized during the referendum as it is today."

The U.K. first voted to leave the EU back in June 2016. It's now three months before the country is scheduled to leave, and there's still no consensus in the U.K. over what should come next.

Amanda Sloat is a senior fellow at the Brookings Institution think tank. In October, she published a report on how Brexit could affect the U.K.'s  different regions — including Northern Ireland's border with Ireland.

The report notes any border infrastructure that divides Northern Ireland from Ireland would be "politically and psychologically unimaginable" to many of the people living in the region. On the other hand, the U.K. will need some sort of dividing line from the E.U. if it wants to make its own trade and immigration policies.

The current "backstop" solution keeps the U.K. tied to the E.U.'s customs regulations until a more permanent deal is worked out. Part of May's trip to Brussels is to find something to reassure ardent Brexit supporters that the E.U. doesn't intend to keep the backstop around forever.

Unfortunately for the dissenters, there's not much time left for the U.K. and E.U. to make major changes to the deal — even if they wanted to. Deal or no deal, the U.K.'s supposed to leave the E.U. by the end of March.

Sloat said, "I think a lot of people are playing a lot of games of chicken, which is a very high stakes strategy given that we are only three months away from the point where Brexit is supposed to take effect. It's worth remembering that the European Parliament still needs to vote on the deal, which could take them about six to eight weeks to do."

O'Sullivan said, "It is horrendously complicated. And people are really grappling with some some very difficult problems. And we do understand that this is, you know, very challenging politically in the U.K. But equally, I think people in the UK have to understand that when you take a decision to leave the European Union, this does have consequences and things cannot continue as they did before, by definition. And there are some tough choices also for the British people to make."