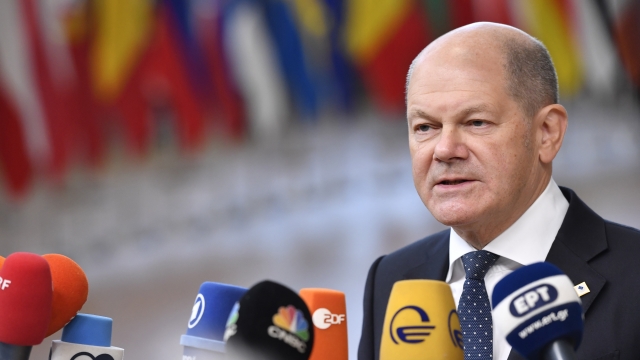 European Union leaders are struggling to reach an agreement on ways to ease soaring energy prices as winter approaches.

European Union leaders were heading into a two-day summit Thursday with opposing views on whether, and how, the bloc could impose a gas price cap to contain the energy crisis fueled by Russian President Vladimir Putin's invasion of Ukraine and his strategy to choke off gas supplies to the bloc at will.

At the opening of the summit, the need for rock-solid EU unity in confronting Russia will be highlighted by Ukrainian President Volodymyr Zelenskyy, who is expected to address the 27 national leaders by video conference from Kyiv, asking for continued help to get his nation through the winter.

"Even such scorched-earth tactics won’t help Russia win the war. They only strengthen the determination and staying power of Ukraine and its partners,” he told Parliament in Berlin.

The upcoming cold season will also be front and center at EU headquarters, where leaders will turn their own heat on in what is expected to be talks that will run deep into the night, with any outcome on a joint energy approach an open question.

Natural gas prices spiraled out of control over the summer as EU nations sought to outbid one another to fill up their reserves for winter. Now EU leaders will seek to increasingly pool their purchases of gas and set a temporary price cap to make sure an overheated energy market doesn't return to haunt them again.

And where Angela Merkel was the soothing voice often brokering a compromise during her 16 years as German chancellor, her successor Scholz is now at the heart of a division in the bloc.

While many EU nations are ready to back a proposal to cap natural gas prices and keep it affordable for its 450 million citizens, Germany and the Netherlands have raised major issues about that, saying it would be unwieldy and could make sure that supplies just bypass the bloc.

The EU's energy commissioner says the current crisis has made it clear how essential renewable energies, like solar and wind, are for the future.

Scholz told Germany's Parliament that “a politically set price cap always carries the risk that producers then sell their gas elsewhere — and we Europeans ultimately don’t get more gas, but less.”

He said the EU must consult closely with other gas consumers, such as Japan and South Korea, so that they don’t compete with each other; and that it’s important to talk with gas producers about “an appropriate price.”

“I am convinced that countries such as the U.S., Canada or Norway, which stand by Ukraine in solidarity together with us, have an interest in energy in Europe not becoming unaffordable.”

Germany and the Netherlands maintain that such market interventions could hurt both the availability of natural gas and incentives for governments and consumers to save it.

A plan for the EU to pool joint purchases of gas and measures to improve solidarity with EU nations most hurt by the spiraling energy prices were expected to receive much more support, diplomats said.

Diplomats are already assessing more sanctions to come. But Hungarian Prime Minister Viktor Orban’s perceived friendliness toward the Kremlin, however, makes life tougher. Even though the previous EU sanctions targeting Russia have been approved altogether, it has increasingly become difficult to keep Orban on board by agreeing to exemptions.

“The failed sanctions in Brussels are already an almost unbearable burden. We will urge the reconsideration of the war sanctions policy,” Orban wrote Wednesday, throwing down a political gauntlet to his colleagues.