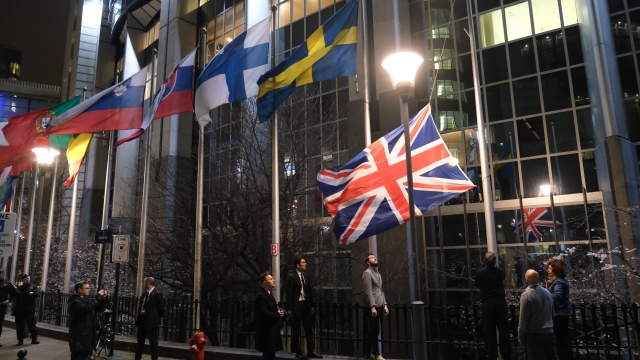 SMS
EU And U.K. Already At Odds Over Trade Future
By Meg Hilling
By Meg Hilling
February 4, 2020
British Prime Minister Boris Johnson insists that the U.K. will not be bound to EU trade rules after the end of this year.
SHOW TRANSCRIPT

The U.K. and the European Union are at odds over what their trade relationship will look like now that Britain is no longer a member state.

The U.K. will continue to abide by EU laws and regulations until the end of 2020. But British Prime Minister Boris Johnson insists that the U.K. will not be bound to EU rules after that transition period.

He expressed optimism about the U.K.'s new opportunities for global free trade.

"We have the opportunity, we have the newly recaptured powers, we know where we want to go, and that is out into the world," Johnson said.

Meanwhile, EU leaders say the U.K. cannot disregard their rules and expect to reach a comprehensive trade deal similar to the ones Canada and Japan hold with the EU.

Post-Brexit discussions to sort out trade, security and other aspects of the relationship will begin in March.