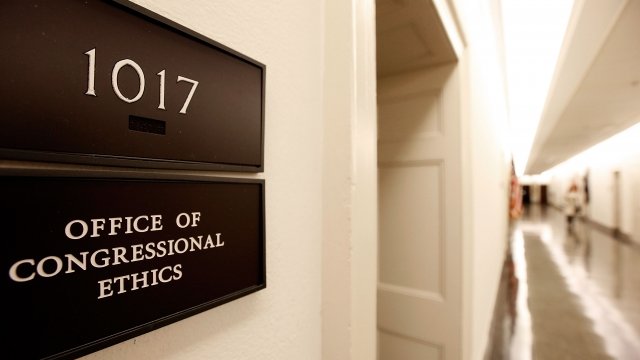 The House and Senate ethics committees are pretty similar but have one key exception.

The House and Senate ethics committees are pretty similar — with one exception.

First, the divergence. In the House, you have the independent Office of Congressional Ethics, which has only been around since 2008.

Eight board of directors, split evenly between parties, are in charge of an independent staff containing lawyers and ethicists who don't have subpoena power. The OCE's main job is to run down "allegations of misconduct against Members, officers and staff of the United States House of Representatives and, when appropriate, referring matters to the House Committee on Ethics."

That's where the two systems in both chambers come back into alignment.

The House committee can either accept or deny the OCE recommendation or open its own investigation from the outset. The ethics committees have been around for a while, but probably not as long as you'd think, leaving members lots of ethical and financial latitude.

The six-member Senate committee came into existence in 1964. Three GOP, three Democrats. The House body (with 10 members evenly split between parties) is even younger, not taking shape until 1967.

Prior to that, the committee's official history says that "some allegations of misconduct were investigated in an ad hoc manner by special committees, and some issues went directly to the floor of the House." Now, much of that legwork happens behind closed doors.

Most of the work is consulting on the acceptability of certain travel accommodations or accepting gifts. Occasionally, it's more serious. If all goes according to plan, everyone's in the dark unless the committee decides to make something public.

Here's a report from the House describing its investigatory options. In the last Congress, over a two-year period the committee:

If there's insufficient evidence, the matter is closed. If a member is found to be in violation of House or Senate rules, the committee can refer the matter to the floor, where the congressman can face a vote on anything from censure to expulsion.