Estimated 73% Of U.S. Now Have Immune Protection From Omicron 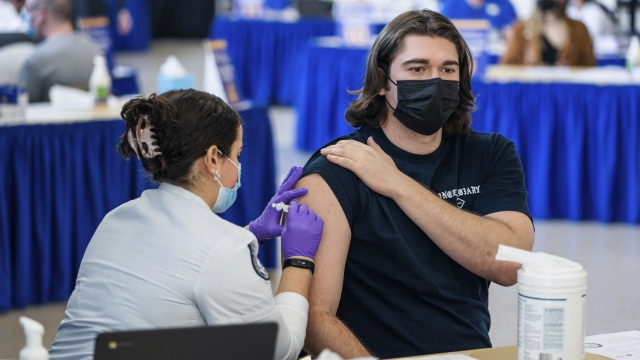 The Omicron wave that assaulted the United States this winter also bolstered its defenses, leaving enough protection against the coronavirus that future spikes will likely require much less — if any — dramatic disruption to society.

Millions of individual Americans' immune systems now recognize the virus and are primed to fight it off if they encounter Omicron, or even another variant.

About half of eligible Americans have received booster shots, there have been nearly 80 million confirmed infections overall and many more infections have never been reported. One influential model uses those factors and others to estimate that 73% of Americans are, for now, immune to Omicron, the dominant variant, and that could rise to 80% by mid-March.

This will prevent or shorten new illnesses in protected people and reduce the amount of virus circulating overall, likely tamping down new waves. Hospitals will get a break from overwhelmed ICUs, experts agree.

"We have changed," said Ali Mokdad, a professor of health metrics sciences at the University of Washington in Seattle. "We have been exposed to this virus and we know how to deal with it." 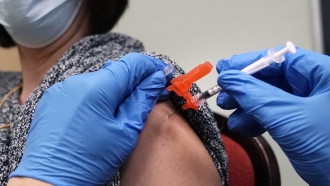 The coronavirus — the current variant or  future ones that are sure to pop up — remains a dangerous germ. It is still infecting more than 130,000 Americans and killing more than 2,000 every day. Tens of millions of people remain vulnerable.

And there will be future outbreaks. The notion of a "herd immunity" that could stop the virus has slipped away under the harsh reality of new variants, waning immunity, and the rejection of vaccines by some Americans.

But the coronavirus is no longer new. Two years ago it arrived in a nation where nobody's immune system had seen it before. The entire population — 330 million people — were immunologically naive, that is, susceptible to infection.

"I am optimistic even if we have a surge in summer, cases will go up, but hospitalizations and deaths will not," said Mokdad, who works on the Institute for Health Metrics and Evaluation model, which calculated the 73% figure for The Associated Press.

With varying degrees of relief and caution, many Americans are starting to return to their pre-pandemic lifestyles.

Sarah Rixen, 41, of Bismarck, North Dakota, started singing again with a civic chorus after taking a year off. Now, with Omicron winding down, she said she feels more confident than at any time since the crisis began.

"But I am still a little leery that there could be another variant around the corner," said Rixen, noting that her family and most of her relatives are fully vaccinated. "I am still going to wear a mask." 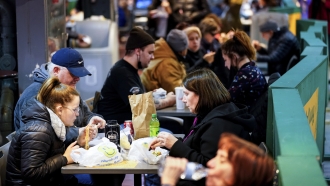 As mask mandates ease, workers return to  offices and flights fill up, experts are trying to understand whether this return to normal can last, or if another setback is looming.

To address that, researchers are trying to answer questions about the virus, the vaccine, and how our bodies respond: How fast is booster protection waning against Omicron? How long does protection from infection last? How many mild infections were never reported? How many people got infected but had no symptoms?

To find clues, they use health data from other countries such as Britain, Denmark, South Africa and Qatar to project what could be in store.

Scientists at Johns Hopkins Bloomberg School of Public Health estimate that about three out of four people in the United States will have been infected by Omicron  by the end of the surge.

"We know it's a huge proportion of the population," said Shaun Truelove, an epidemiologist and disease modeler at Johns Hopkins. "This varies a lot by location, and in some areas we expect the number infected to be closer to one in two."

That means different regions or groups of people have different level of protection — and risk. In Virginia, disease modelers are thinking about their population in terms of groups with different levels of immunity.

They estimate about 45% of Virginians have the highest level of immunity through boosted vaccination or through vaccination plus a recent infection with Omicron. Another 47% have immunity that has waned somewhat; and 7% are the most vulnerable because they were never vaccinated and never infected.

In all, the vast majority of Virginians have at least some immunity, said Bryan Lewis, a computational epidemiologist who leads University of Virginia's COVID-19 modeling team.

"That's going to be a nice shield of armor for our population as a whole," Lewis said. "If we do get to very low case rates, we certainly can ease back on some of these restrictions."

Still, while the population is better protected, many individuals are not. Even by the most optimistic estimates for population immunity, 80 million or so Americans are still vulnerable. That's about the same as the total number of confirmed infections in the U.S. during the pandemic.

"The 26% who could still get Omicron right now have to be very careful," Mokdad said.

Andrew Pekosz, a virus researcher at the Johns Hopkins Bloomberg School of Public Health, is concerned that people — particularly unvaccinated Omicron survivors — may have a false sense of security. "In an ideal world, unvaccinated individuals infected with Omicron would be lining up for a vaccine shot," he said.

Also, estimating protection is far from an exact science. It's a moving target, as immunity wanes and new variants circulate. Protection varies widely from person to person. And it's impossible to know for sure how many people are protected at all. The IHME model estimates a wide range — from 63% to 81% of Americans.

"We've reached a much better position for the coming months, but with waning immunity we shouldn't take it for granted," Mokdad said.