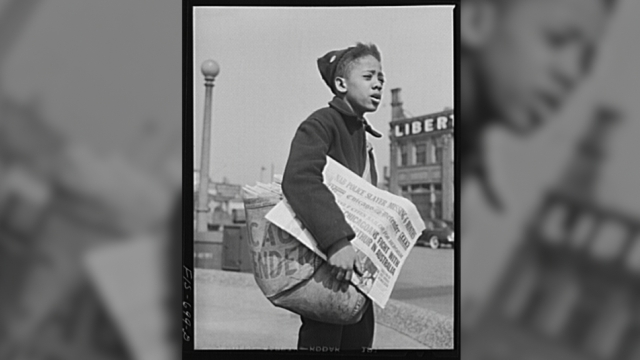 Freedom's Journal, The Chicago Defender, The North Star — all of these publications were created for, written for and by African Americans during the 19th century.

These newspapers were written to establish African American communities and provide an outlet for African Americans to speak for themselves because for so long, their voice was not heard in predominately white circulated newspapers.

Freedom's Journal — the first Black-owned and operated newspaper — was established in 1827 to help advocate for the abolishment of slavery.

After the Civil War, nearly 500 African American newspapers would find their way to readers before the start of the 20th century.

"The first one was Freedom's Journal in 1827, and the editorial of that paper started with 'We will tell our own story' ... We've always been advocates. A part of that advocacy was about full participation in the American experiment, if you will, and talking to those issues about it," said The Atlanta Voice president, James Washington.

"The press was supposed to be a check and balance for government. Well, if we're a check and balance for government, does that mean that forever the Black press has been an advocate forever regular press has been an advocate. That's kind of where we are and it still exists today," Washington continued. "Even though the Civil War was over, it doesn't mean that segregation was over. It doesn't mean that marginalization of where you lived, where you worked, what you could do and what you couldn't do, was not still important. I believe it was The Chicago Defender that actually told people in the south to move north to get away from some of the oppression that was there. That, in and of itself, built community.

It was an institution where our communities could go and feel in some way empowered to be who we are."

The Pittsburg Courier had an estimated weekly circulation of nearly 300,000 papers in 1929, but historians think that the reach was even higher as copies were shared.

Today, 205 newspapers are part of the National Newspapers Publishers Association, which is an organization that represents the Black press in the United States.

But that number isn't the full picture of consumption.

"Circulation of Black-owned newspapers is no different from circulation of white-owned newspapers," Washington said. "If you look at what's going on with larger general market publications now, all it means is competition is running rampant. And Black newspapers are — the print circulation may be off — but it's off everywhere, it's not unique to us ... If you only put your message in print, a lot of people are not going to hear you because people are not consuming their news that way. So I think that you have a number of examples of newspapers who are broadening and diversifying how they present their content."

Digital media is changing how we get our news, but is it also changing the purpose of the Black press?

"I'm not sure if we serve the same purpose, but in may ways I believe we do because we're still advocates. We’re still trying to illuminate what it means to be African American in America. And not just leave that messaging or that story to folks who are not a part of our community because that's an outside looking in. We're an inside looking in and also showing the world who we are," Washington continued. "You can't fix where you are going until you know where you've been. I mean that is much of an American philosophy that I know of. There is a reason that the First Amendment talks about freedom of the press and independent freedom of the press, because you need an independent press to actually check on government. The more folks that you have that talk about an idea, you're going to probably get some solutions to those ideas."