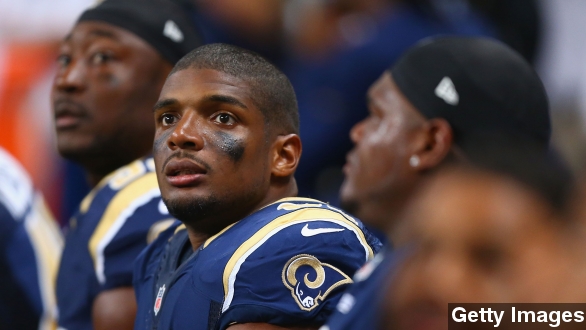 JOSINA ANDERSON, ESPN REPORTER: "Another Rams defensive player told me that 'Sam is respecting our space.' He seems to think that Michael Sam is kind of waiting to take a shower, as not to make his teammates feel uncomfortable."

ESPN reporter Josina Anderson was originally asked to talk about how Sam, the NFL's first openly gay player, is fitting in with his new teammates.

And she probably should have stopped after quoting Rams defensive tackle Kendall Langford as saying Sam's "one of the guys and seems to be taking a rookie approach in terms of listening and learning at his own pace."

Just a few hours after the segment aired, Chris Long, another one of Sam's teammates, called ESPN out on its overshare, tweeting, "Dear ESPN, Everyone but you is over it."

And others quickly followed suit on social media.

CYD ZEIGLER, OUTSPORTS CO-FOUNDER: "Forgive me if there's a bit of an echo in this, but I'm naked in my shower. You know, as a gay man, I have to shower by myself in my own shower because God forbid I might shower with straight guys."

That was Cyd Zeigler, the co-founder of Outsports, a site that focuses on sports news from an LGBT perspective.

Many other media outlets seemed to share his sarcastic sentiment.

Sam is, of course, no stranger to media attention like this. Ever since he publicly came out as gay earlier this year, Sam has faced scrutiny that other NFL players will likely never face — like the heated debate that ensued after video of him kissing his boyfriend aired on national television during the draft.

And interestingly enough, while the network seems to think showering in sports is a big deal, ESPN The Magazine happened to publish an extensive piece on the issue last month with a different tone.

"[Sam's] teammates' reaction to showering with the first openly gay man in NFL history can best be summed up as one collective yawn. 'Look, guys shower together,' says Rams linebacker Jo-Lonn Dunbar. 'And Sam's been showering with guys forever.'"

In a statement released Wednesday morning, ESPN did say it regrets the report and that it "failed to meet the standards we have set in reporting on LGBT-related topics in sports."

And in more relevant news, Sam survived the first round of cuts by the Rams Tuesday afternoon.