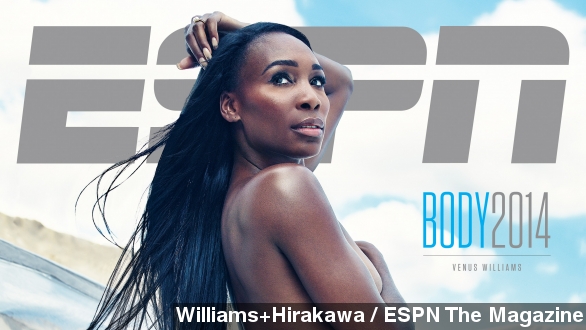 ESPN The Magazine's annual Body Issue marks the one time each year we see athletes of all shapes and sizes in the buff.

ESPN describes the tastefully nude issue as a way to celebrate the human body and all the amazing things it can do, particularly in the realm of sports.

The very first Body Issue hit newsstands in 2009, and got plenty of buzz for its anti-swimsuit model stance. All that attention led to a lot of sales, and it's put up impressive numbers for ESPN ever since. (Via USA Today)

But considering how much green the naked athletes have brought in over the years, we have to wonder — is the Body Issue a respectful ode to the human form? Or just another case of sex sells?

Some critics don't think the Body Issue is a celebration of athletes at all. A doctor from the Tucker Center for Research on Girls and Women in Sport outlined in her blog two opposing viewpoints on what the Body Issue actually does. One side believes it empowers female athletes by giving them visibility and showing the diversity of their bodies. The other says it's just another way to objectify and sexualize women in sports. (Via ESPN, University of Minnesota)

​Feministing pointed out in the 2012 edition several of the women's photos didn't depict them playing their sport. Instead, they were photographed laying on the beach or lounging.

But despite all the backlash and controversy — or perhaps in part, because of it — the Body Issue has done more than its fair share for ESPN revenue-wise.

The Body Issue was created smack dab in the middle of the financial crisis of 2007 to 2010. (Via ESPN)

Back then, The Mag was struggling to compete with Sports Illustrated and its uber popular annual Swimsuit Issue — a publication it's still neck-in-neck with today.

A writer for The New York Times argued the special issue was conceived as a way to draw in advertisers' money and attention during those tough times.

And as The Wrap reported, it did. That first 2009 edition raked in double the normal sales and boasted 35 percent more ad sales. It also generated an astounding 400 new subscriptions to ESPN's premium online content in the two hours after the Body Issue was put up online.

According to ESPN's Customer Marketing and Sales page, 2013's Body Issue had a 34 percent higher readership than the average issue.

Still, while the Body Issue may have been created to sell sex for more advertising dollars, it has its defenders.

As a writer for Think Progress puts it, "When I look at the Body Issue, I don’t get the impression that ESPN is selling sex as much as it is selling bodies and the stories behind them, and those bodies and those stories are an integral part of sports that deserve to be appreciated."

And in recent years ESPN has included body types that don't exactly fit the mold.

The 2014 issue will feature a nude shot of Texas Rangers slugger Prince Fielder. According to CBS Sports, Fielder is listed at 5-foot-11 and 275 pounds — not the typical build of a male supermodel.