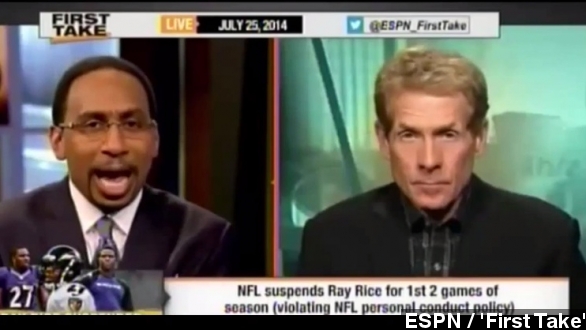 By Jasmine Bailey
July 26, 2014
ESPN sportscaster, Stephen A. Smith rants live on 'First Take' about how women should be mindful about provoking physical violence.
SHOW TRANSCRIPT

There's been no shortage of media commentary  after a shocking video of Baltimore Ravens running back Ray Rice surfaced.

It shows him dragging his wife, then fiancé's, unconscious body out of an elevator after the two allegedly got into an altercation. Rice was charged with assault and got hit with a two game suspension. (Via TMZ /Getty Images)

But according to ESPN's host of First Take, Stephen A. Smith, it's the woman's job to try not to provoke it.   (Via Getty Images)

"I think just talking about what guys shouldn't do, we got to also make sure that you can do your part ....We have to make sure we learn as much a we can about elements of provocation." (Via ESPN)

Guess what? That little rant did not go over well. "It’s as though Smith has no control of his own mouth, vomiting out the ridiculous and then trying to backpedal while restating his thesis. And [co-host] Skip Bayless just sat there and nodded, not unlike a woman trying to avoid provoking an unpredictable and unreasonable boyfriend," wrote Boston.com.

Even Smith's co-workers chimed in. Through a series of tweets, Michelle Beadle said she was once in an abusive relationship. Writing, "Violence isn't the victim's issue. It's the abuser's. To insinuate otherwise is irresponsible and disgusting. Walk. Away."

Smith then offered an apology on TwitLonger. "I do NOT believe a woman provokes the horrible domestic abuses that are sadly such a major problem in our society. I wasn’t trying to say that or even imply it  ... I understand why my comments could be taken another way."

NBC explains, "The controversy comes as many are questioning why they didn't give Ray Rice a stiffer punishment for the assault. Others faced worse penalties for marijuana use."