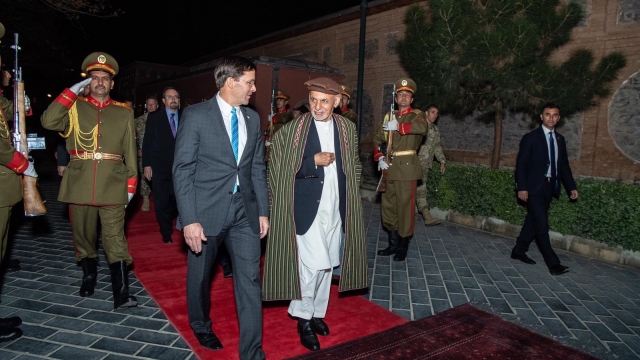 Defense Secretary Mark Esper took an unannounced trip to Afghanistan on Sunday to restart peace talks with the Taliban. The renewed effort comes more than a month after President Donald Trump declared the negotiations "dead."

The U.S. and the Taliban reached a peace deal "in principle" in September. That agreement — which was brokered over a year of negotiations — involved withdrawing over 5,000 American troops from Afghanistan.

But President Trump cut off negotiations after the Taliban claimed responsibility for a suicide bombing in Kabul, which killed 10 Afghan civilians and one U.S. service member.

The Taliban had informally resumed talks with U.S. envoy Zalmay Khalilzad earlier this month. Esper says the objective in the renewed discussions is still the same: to negotiate a peace deal between the Taliban and Afghan governments.

Esper met with Afghan President Ashraf Ghani Sunday night. He said they agreed that "Afghanistan must never become a safe haven for terrorists to attack the U.S."