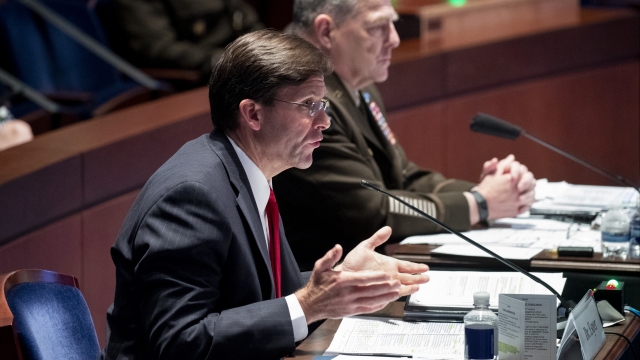 Defense Secretary Mark Esper confirmed that timeline during a hearing Thursday in front of the House Armed Services Committee.

Defense Secretary Mark Esper was briefed back in February on intelligence about Russia allegedly offering payments to the Taliban to kill U.S. and coalition forces in Afghanistan.

Esper confirmed that timeline during a hearing Thursday in front of the House Armed Services Committee.

He initially told lawmakers he'd never received a briefing that included the word "bounty," when asked a carefully-worded question from Republican Rep. Mike Turner. But when Esper was later pressed by Democrats on the panel, he clarified that he'd been briefed earlier this year after U.S. commanders in Afghanistan heard about the reports in January.

Esper: "I got some initial reporting on the ground that they began pursuing. Neither thought the reports were credible as they dug into them."

Both Esper and the Chairman of the Joint Chiefs of Staff Gen. Mark Milley, who was at the hearing, said the intelligence had still not been corroborated months later.

Milley: "I, and the Secretary and many others are taking it serious. We're gonna get to the bottom of it.  When I find out if, in fact, it's true, and if it is true, we will take action."

Esper also said he's ordered an investigation into a series of leaks of sensitive information coming from the Pentagon. He said those "unlawful" leaks, which include the disclosure of the alleged Russian payments, started last year and have continued into 2020.