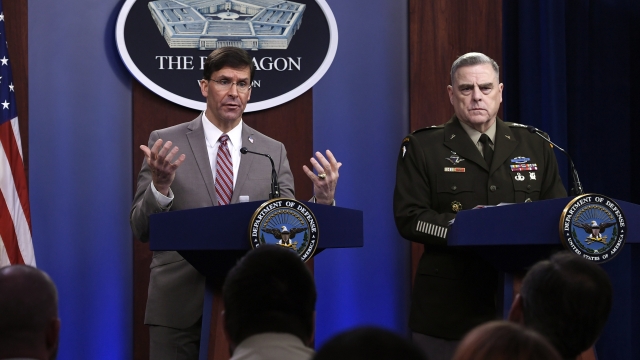 SMS
Esper And Milley To Testify Thursday Before House Committee
By Katherine Biek
By Katherine Biek
July 9, 2020
The two military leaders will be questioned about the role the Pentagon played in responding to protests triggered by the death of George Floyd.
SHOW TRANSCRIPT

Top military leaders at the Pentagon are testifying before the House Armed Services Committee Thursday.

Lawmakers are expected to question Defense Secretary Mark Esper and the Chairman of the Joint Chiefs of Staff Gen. Mark Milley about the role the Pentagon played in responding to protests triggered by the death of George Floyd.

President Donald Trump threatened back in June to send active-duty troops to states to quell the protests, some of which had led to violence and property destruction.

That led Esper to publicly push back against the president's proposal, telling reporters he did not support invoking the Insurrection Act.

Esper and Milley have both also tried to distance themselves from a controversial photo op they took part in with President Trump. They and other top officials had joined the president in a walk to St. John's Episcopal Church for photos after police used teargas to clear mostly peaceful protesters from the area.

Milley: "I should not have been there. My presence in that moment and in that environment created a perception of the military involved in domestic politics. As a commissioned uniformed officer it was a mistake that I've learned from."

This is something President Trump opposes. He's threatened to veto this year's proposed defense spending bill if it includes language requiring those Army bases be renamed.

Additional reporting by Robert Burns and Lolita C. Baldor of the Associated Press.