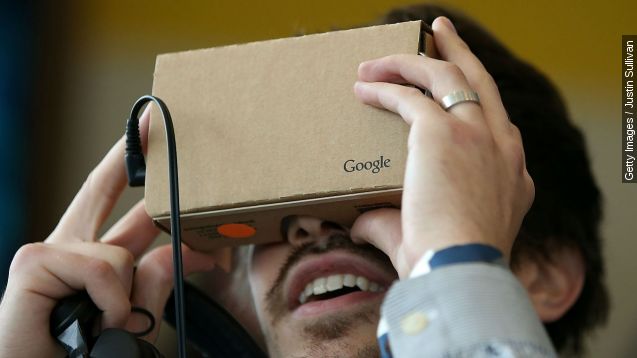 2015 gifted us with a ton of ways to escape into an alternate reality, just in time for the holidays.

The best way to avoid the stress of the holidays has got to be avoiding reality entirely. And 2015 has given us several ways to do that with virtual reality gadgets.

This week saw the launch of VirZoom, which is basically video game spin class. But you'll have to pump your brakes on purchasing, it's only available for pre-order. (Video via VirZoom Inc)

If you're looking to escape reality without the sweat, Samsung Gear VR came out in late November. Right now, Samsung is teasing the perks of gaming in VR.

"Now you don't just look at the stars, you fly among them," said the Samsung Gear VR commercial. (Video via Samsung)

Google Cardboard is kinda like an old school View Master but instead of a circle of photos, you put your iPhone inside. And it blew up this year.

And apparently Cardboard is all about freebies. Verizon customers could get one for free through a Star Wars promotion and Visa and Bank of America gave Cardboards to 10,000 Patriots fans to watch them practice. Also, The New York Times sent Cardboards to its subscribers to view its VR content which includes a story about displaced children. Just to name a few. (Video via Tested)

For you news hounds out there –– multiple news outlets are publishing VR journalism. ABC News published a Syria virtual reality story to Jaunt VR which let Cardboard users feel like they were traveling through Damascus. So now you can be immersed in hard hitting journalism instead of navigating a kitchen full of relatives.

But even though the holidays can be stressful, sometimes you don't want to miss a single second or angle. To help you out with that, this year Facebook and YouTube made it possible to upload 360 video to your page.