The Risk Of Chain-Reaction Collisions Above Earth Is Only Growing 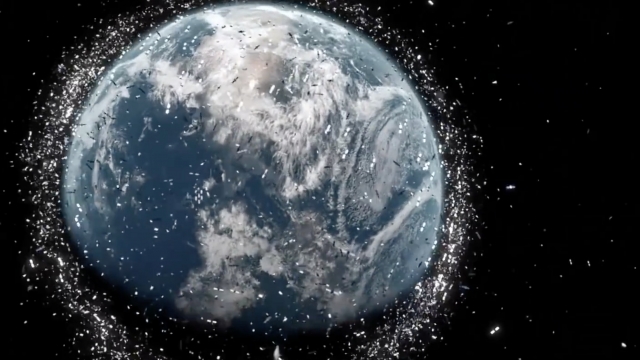 The European Space Agency warns space debris is a serious problem that only a global response can fix.

Imagine two satellites colliding at about 20,000 mph and all the debris shooting out, possibly hitting other spacecraft.

That's the mess the European Space Agency is warning the public about. Its worst fear is an unstoppable chain reaction of collisions at Earth's most popular area of orbit.

Scientists are already tracking more than 18,000 objects in space and 750,000 small fragments that could cause serious damage.

"The energy contained in a 1 centimeter particle hitting a satellite at that velocity roughly corresponds to an exploding grenade," the head of the ESA Debris Office said.

But of all the objects being tracked, there's only 1,100 spacecraft currently carrying out a mission.

Aging spacecraft aren't only dangerous because they're still in orbit, they're more likely to throw debris.

The ESA recommends countries take their satellites out of orbit within 25 years of the end of their missions, but that often doesn't happen.

And with satellites becoming cheaper, the congestion is only getting worse. Roughly 12,000 new satellites are expected to go into orbit in the coming years.

The launch was originally scheduled for March but was delayed due to a leak.

In February, India brought 104 small satellites into orbit on just one rocket launch. And businesses, like Virgin and SpaceX, are trying to make satellite transportation lucrative.

Besides convincing space-faring countries to bring their crafts back to Earth when they're done with their missions, or pushing them out into less populated areas of space, the ESA is working on technology to rein in satellites.

But it notes the problem will only be fixed if all space-faring nations do their part.

"We have generated a global problem that can only be solved on a global scale. It needs a global response," the head of the ESA Debris Office said.