Former Trump Aide May Have Lied Under Oath About Seychelles Meeting 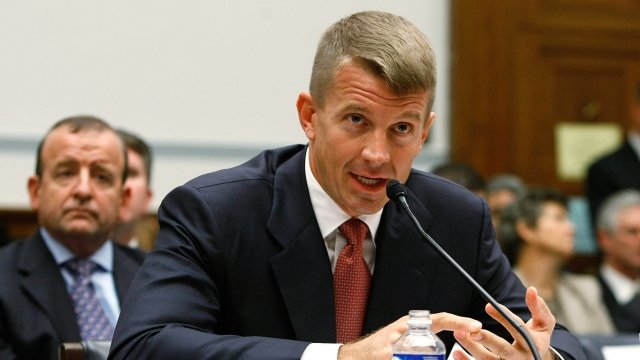 SMS
Former Trump Aide May Have Lied Under Oath About Seychelles Meeting
By James Packard
By James Packard
March 7, 2018
Erik Prince, a former adviser to President Trump, didn't state a UAE adviser was at a meeting with Russians in his testimony before Congress.
SHOW TRANSCRIPT

Democrats on the House intelligence committee are sounding alarms about testimony regarding who attended a January 2017 meeting in the Seychelles that's come under intense scrutiny in the Trump-Russia probes.

Several outlets reported Tuesday that an adviser to the United Arab Emirates with ties to the Trump administration, George Nader, is cooperating with special counsel Robert Mueller's investigation. Those outlets also reported Nader attended that Seychelles meeting last year. Anonymous sources have told several outlets the meeting was an attempt to set up a line of communication between the Trump team and Russia.

Erik Prince, the brother of Education Secretary Betsy DeVos and a former adviser to Trump, was at the meeting. He says he was there for business reasons and was not representing the Trump team. He denies the meeting was intended to set up that communication channel. But when lawmakers asked him who he met with, he didn't state that Nader was at the meeting.

Now, Democrats like Rep. Eric Swalwell say if Prince did actually meet with Nader, then he lied under oath.

Nader's reported cooperation with the Mueller probe could be an indication that Mueller and his team are focusing more closely on the Seychelles meeting.