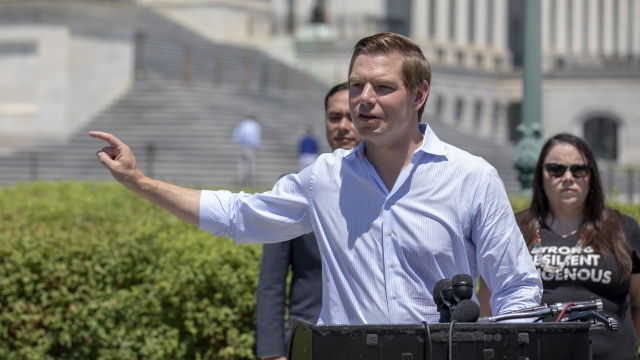 As the pool of Democrats running for president keeps growing, some candidates are differentiating themselves by centering their campaign around a single issue. For Rep. Eric Swalwell, that issue is gun control.

During his campaign kickoff speech, the California representative took a swipe at Republican priorities during the start of the Trump administration.

"The very first piece of legislation that they passed — the act that would tell the world, 'These are the values we espouse above all others' — was a bill that made it easier for the mentally ill to purchase guns. ... They called it House Joint Resolution 40," Swalwell said.

First, let's clear up what he got wrong. House Joint Resolution 40 was not the first bill passed by the previous Congress. The House and Senate each approved the bill in February 2017, and President Trump signed it at the end of that month. That puts it among the first 10 bills Congress passed that session, but again — not the first, as Swalwell said.

As for his description of what the bill actually did — the congressman got that part right.

HJR 40 is a one-paragraph piece of legislation that walked back a previously approved rule. That rule would have required the Social Security Administration to share the names of certain people who have disabilities with the National Instant Criminal Background Check system — effectively barring those people from buying guns. The Obama administration said the requirement would impact about 75,000 people who have a "documented mental health issue, receive disability benefits, and are unable to manage those benefits because of their mental impairment, or who have been found by a state or federal court to be legally incompetent."

Supporters of the rule said it would keep guns out of the hands of people with a documented mental illness. Opponents argued it wouldn't do much to slow gun violence and it would unfairly prevent people with disabilities from owning guns.

Removing that information-sharing requirement kept the names of thousands of people out of the country's gun background check system. So Swalwell was correct in saying the law made it easier for certain people with mental illnesses to buy a gun.