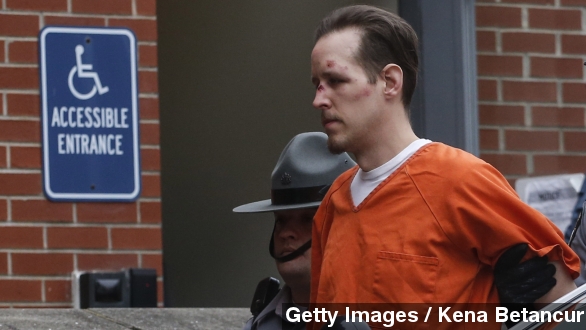 SMS
Eric Frein Labeled Terrorist For Letter To Parents
By Ben Lawson
By Ben Lawson
November 13, 2014
Prosecutors charged Frein with two counts of terrorism and revealed a telling letter he wrote to his parents.
SHOW TRANSCRIPT

Eric Frein, the man who police say shot and killed one Pennsylvania police officer and seriously injured another, has been charged with two counts of terrorism.

Prosecutors say Frein shot the officers with the purpose of influencing government policy and affecting the conduct of government, which allows them to charge him with terrorism. These charges are based around a letter Frein wrote to his parents.

The letter reads: "Tension is high at the moment and the time seems right for a spark to ignite a fire in the hearts of men. ... There is so much wrong and on so many levels [that] only passing through the crucible for another revolution can get us back to the liberties we once had."

The terrorism charges both carry maximum sentences of 40 years. Frein faces 11 other charges as well, including homicide of a law enforcement officer. Prosecutors reportedly plan to seek the death penalty for Frein. (Video via Fox News)

The Pocono Record spoke to Frein's attorney who said he was denied access to Frein after his arrest. He says this gives him a valid argument that Frein's statements after he was taken into custody shouldn't be admissible.

Frien, a self-trained survivalist, evaded capture from law enforcement in the Pennsylvania wilderness for two months before being apprehended Oct. 30 near an abandoned airplane hangar.