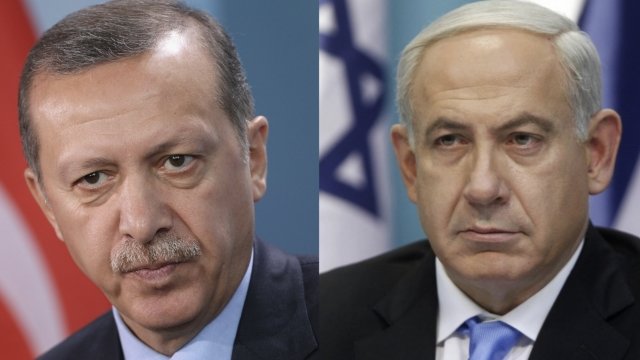 The leaders of Turkey and Israel traded insults over the latter country's law declaring it a Jewish nation state.

Turkish President Recep Tayyip Erdoğan said the law "is evidence ... Israel is the most Zionist, fascist and racist state in the world." He also said "the Hitler spirit ... has risen again among some Israeli officials" and that "the Israeli administration's view to identify those ancient lands as belonging to Jews alone is no different from [Adolf] Hitler's obsession with the Aryan race."

Israel's recently passed "nation-state" declaration was criticized by Jews at home and abroad. Critics said that because the law doesn't mention democracy, among other things, it would encourage discrimination against the country's Arab minority.

Israeli Prime Minister Benjamin Netanyahu responded on Twitter, saying Erdoğan has led Turkey to becoming a "dark dictatorship." He also referenced the Turkish military's attacks on Syrians and Kurds as well as Erdoğan's post-coup crackdown that has led to tens of thousands of people being jailed.

Israel and Turkey have been allies in the past. But relations have been strained recently following Israel's lethal response to Palestinian protests along the Gaza border, which left more than 100 dead. Israel Defense Forces maintains its soldiers only shot at people attempting to damage the border fence or cross it.